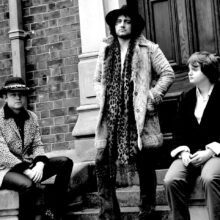 UK glam-rock trio Tremendous don’t hang around on debut album ‘Relentless’. The chorus on opening track; ‘Don’t Leave Our Love (Open for Closing)’, crashes in kicking and screaming after only 21 seconds. And what a glorious hook-laden chorus it is.

An unashamed throwback to the era of Chinn & Chapman three-minute hit singles, and although loathe to use the old adage – “don’t bore us, get to the chorus”, it is very apt when approaching Tremendous. This particular phrase can often imply that by bypassing the fancy stuff and going straight for the money shot; the music on offer can somehow be inferior. It didn’t seem to be an issue with The Beatles though, no need for any foreplay on classics like ‘She Loves You’, so don’t underestimate the power of a well-written, well-produced, and well-performed banger that comes in at under three minutes. And ‘Relentless’ is chock full of them.

The aforementioned ‘Don’t Leave Our Love (Open for Closing)’ is a fantastic, uptempo album opener. Power pop/glam rock of the highest order. Guitarist/vocalist Mark Dudzinski peels off James Dean Bradfield-esque guitar licks in crucial places to give the track a soaring, uplifting quality. The Manics vibe continues, to an extent, on the light and airy ‘Like Dreamers Do’, which has a brief, killer guitar solo from Dudzinski amongst the floating vocals. The majestic ‘Rock ‘n’ Roll Satellite’ gained some attention from Classic Rock magazine, and it’s easy to see why. The Leppard-like guitar intro is a bit of a red herring as the track quickly turns and goes down the path marked “Glam”. Bowie, Bolan, Mott The Hoople, Roxy Music, The Sweet, Slade; anything with substance really, all present and correct. The hooks are massive, tailor-made for audience participation, a real earworm moment.

‘Bag Of Nails’ has more of a harder edge, the production is first rate and really puts the band in front of a stack of Marshall’s cranked all the way skywards. Bizarre coupling, but imagine Slash guesting with Suede and you are on the right path. ‘Daniela’ hints at an early Guns N’ Roses influence, as does ‘Copycat Killer’ and ‘Heart Sinker’: both easily could be Duff’s choices on ‘The Spaghetti Incident’. Great guitar tones on the latter, which continues on ‘Fightin’ To Lose’ which has a real Buzzcocks DIY-vibe.

‘Relentless’ is a strong debut with some memorable moments. One of the pleasing aspects is that it’s well-produced while still keeping a raw feel to it, and there is very little fat on its bones. A bold move calling your band Tremendous (can just imagine some of the comments on Blabbermouth), but thanks to the quality on display, it works. File under “ones to watch”.