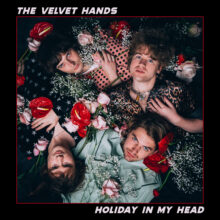 Taking equal parts inspiration from 1970’s new wave and 2000’s indie, The Velvet Hands, formed of Toby Mitchell, Dan Able, Louis Mitchell & Sam Hilder, have an unashamed love of guitar-based songwriting. The band, who blend slacker story-telling and belting guitar riffs, reminiscent of The Strokes or contemporaries such as The Vaccines, Parquet Courts & rousing punk choruses that recall The Clash, have supported both Paul Weller and Liam Gallagher as well as headlining stages at The Isle of Wight Festival & Why Not, and will be playing Michael Eavis’ Pilton Party on June 11th ahead of the release of their new album in 2022.

Of new single Holiday In My Head, guitarist Dan said: “It’s based on our own experience of the doldrums of being skint, working your arse off to be able to afford a postage-stamp-sized flat, only to have to shave in the kitchen sink because the landlord won’t fix the one in the bathroom. Take that and then put it in lockdown, it felt like the walls were closing in – very claustrophobic. You can’t escape to anywhere apart from your own daydreams. The song is an anthem of escapism in the modern era”.