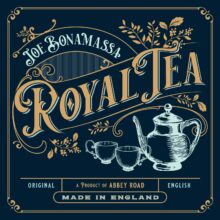 With his relentless work ethic, it’s hard not to seem blasé about the prospect of a new Joe Bonamassa album. A plethora of live albums, albums with Beth Hart, a 20th-anniversary edition of his debut album, and the recent instrumental album with his new project; The Sleep Eazys, Bonamassa is never out of the (record buying) public eye for very long. But given the talent of the company that Bonamassa keeps, it’s understandable why he works so much and never seems to take a break.

‘Royal Tea’ should have been released last year, but long-time drummer Anton Fig brook his foot and faced with a choice of bringing in a new drummer or pushing the recording sessions back, Bonamassa opted for the latter. He knows what Fig brings to the party and is an integral part of this sublime band that Bonamassa has assembled. With Kevin Shirley in his usual position at the production helm, everyone knows what is expected of them, and to a person, they make it look effortless. One new key addition to the Bonamassa recording family though; enter the inimitable Bernie Marsden as main co-writer of Bonamassa’s tribute to British Blues Rock: ‘Royal Tea’.

Fulfilling a long-overdue dream, ‘Royal Tea’ was recorded at Abbey Road Studios and begins with a sweeping majesty on ‘When One Door Opens’ which befits the most famous recording studios in the world. The seven-minute plus opener comes complete with gorgeous John Williams-like orchestral arrangements that sweep the listener off their feet, a melancholic vocal performance from Bonamassa that gets better with each listen, and then a tip of the hat to ‘Beck’s Bolero’ which kicks on into a barnstorming track complete with thumping bass from Michael Rhodes and lush backing vocals from Jade MacRae and Juanita Tippins. Bonamassa sounds like a man possessed when he breaks into the solo towards the end, and it sounds like the band had fun playing heavier material. Seven minutes that fly by. You don’t see many “Tracks Of The Year” polls anymore, but if 2020 sees a return of them, then ‘When One Door Opens’ deserves its place amongst the top ten.

The title track follows on from the thrilling opening track and settles into a smouldering, blues shuffle where the keys work from Reese Wynans play a crucial role. Then all hail the arrival of Bernie Marsden. Before Whitesnake went all L.A. they were a premier British Blues Rock outfit, with Bernie Marsden perhaps overshadowed in a band that also featured David Coverdale and Jon Lord. His contribution to Whitesnake was key to some of their best albums, and this continues throughout ‘Royal Tea’. ‘Why Does It Take So Long To Say Goodbye’ is the first of numerous co-writes and for lack of a better phrase (plus, this is a “British” tribute album); it’s the dog’s bollocks. Not a million miles away from early ’80s Whitesnake, it’s a slow-burning tale of heartache, with a killer vocal performance from Bonamassa, some almighty hooks, and a subtle, show-stealing performance from Wynans. One of those tracks that as soon as it fades out, the only thing to do is hit rewind. More Marsden co-writes come in the shape of ‘High Class Girl’ which has an irresistible Mod/R&B swing to it which results in involuntary toe-tapping and finger-clicking; the power-chord laden ‘A Conversation With Alice’; uptempo and galloping ‘I Didn’t Think She Would Do It’; and the rather lovely cool vibes of closing track ‘Oh Savannah’. How good would it be if 2021 saw touring resume and Bernie went out on the road with the band?

The Brit connection continues with the assistance of a few other stalwarts; Cream lyricist Pete Brown adds a British flavour here and there, as does Dave Stewart, and then there is the unmistakable sound of Mr. Boogie-Woogie himself Jools Holland on the rollicking big band vibes of ‘Lonely Boy’, which is great fun.

‘Royal Tea’ is the by-product of personal splits. Bonamassa splitting with his partner, and in the case of the title-track itself, Harry and Meghan splitting with the royal family (‘Royal Tea’ = Royal-ty). Fuelled by the “grief” process that a major split brings, Bonamassa has produced his strongest album in quite some time, and whisper it; he has stolen some of Springsteen’s thunder on the same day that studio album number twenty from Springsteen was released.