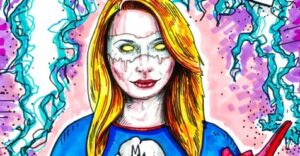 The Middlenight Men release their catchy new power-pop single “Heroine Heights” today. You can watch the epic video above – the video has been a labour of love and took 8 months in total to produce – 5 months prep (script and pre-production), 2 months shooting, and 1 month editing. It’s been a rollercoaster but it’s finally ready!

The band were formed by Nick Hughes who bought long-time friend Leon Cave (Status Quo) along for the ride and worked with producer Andy Brook who he met whilst previously in the Soho-based power pop band The Role Models in 2015. “Heroine Heights” follows on from previously well-received tracks “Rat Star” and “B.A. Baby”.

Nick has said of the song, “The core message of the song itself is something that’s really important to me. I still find myself being constantly embarrassed, every single time, to be a guy when I walk down the street and see all the lecherous, catcalling, rude ass guys who think it’s perfectly acceptable to shout out after girls. It’s disgusting and I can only imagine what it feels like for girls. We wanted to address this but obviously, we like mixing humour and seriousness in most of the things we produce so I decided to mix this with the superhero element and refer to some of the relationships between the heroes and villains and relate it back to the core message. That this simply is not okay.”

Nick’s reputation was made from a decade of touring the UK circuit and hitting the bars of Camden just as much. It was a chance encounter in 2013 with Chris McCormack (3 Colours Red, The Professionals) that landed him a session gig playing in The Yo-Yos with Chris’s brother, Danny McCormack. Additionally, Nick also works with Terrorvision. Love Zombies amongst others.

Nick decided to write his own music when inspiration finally hit whilst he was on a South American tour with the band “Duncan Reid and The Bigheads” (feasting Duncan ‘Kid’ Reid of ’77 power pop band The Boys). During a 3 day stint in Buenos Aires, Nick found himself lone guitarist (due to his partner in crime missing TWO planes) and at the full mercy of the Latino fans. Over these 3 days, he found himself in some intense situations, with no ability to speak the language and being driven to parties in the middle of nowhere, and struggling to find his way from gig to gig. Nick wrote the album “ISSUE 1” over the next year and went into the studio with Leon and Andy in November 2019. Some of Nick’s favourite colleagues over the last decade joined to make the album and the lineup of The Middlenight Men “Issue 1” became clearer.

Why The Middlenight Men? While lyrically it embodies the thoughts that invade our dreams when we’re trying to remember or trying to forget, its key meaning is how it represents the band. A group of individuals all with their own backstories and projects that come together at various times to unite to spread excitement and anthems among their fanbase.

Connect with The Middlenight Men here.