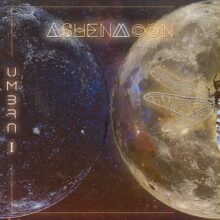 After teasing fans with a few singles/videos here and there, AshenMoon has finally dropped their debut EP: ‘Umbra I’, and the wait has been more than worth it.

Although the marquee name within AshenMoon is INXS bassist Garry Beers, this is a band in the truest sense of the word. LA-based Aussie Toby Rand provides the all-important (and soul-drenched) vocals, well-traveled guitarist Jimmy Khoury brings the licks and accomplished newbie Zak St John is behind the kit. Introductions over, what should you expect with AshenMoon? INXS MKII it definitely is not, although with Beers onboard, and INXS being so influential, it’s easy to get into an INXS groove in places. You can expect some hints of a Depeche Mode influence (especially on the intro to ‘Dustbowl’), a touch of U2 throughout (Rand does spark memories of a younger Bono), and lashings of modern rock n’ roll with oodles of fiery guitar play from Khoury. You can also expect to move about a bit when listening to AshenMoon as they understand the importance of groove.

‘Dustbowl’ is a pulsating opener with loads going on throughout, ultra-modern in its overall feel with a killer guitar tone from Khoury, part-The Edge part-Bobby Womack ‘Across 110th Street’. As introductions to AshenMoon go this is bloody marvelous. ‘Mosquito’ begins with a slight Royal Blood-like feel, very subtle, but it is there. Once the main body of the track kicks in, it becomes apparent just how powerful a vocalist Rand actually is. You might remember him from the Rock Star: Supernova TV show (go on, say that in a Troy McClure voice, it works better) where he finished third out of fifteen performers (and arguably should have won). A raw talent that has grown and matured over the subsequent years since he impressed judges like Tommy Lee, Jason Newsted, and Gilby Clarke. `Future Kings & Queens` is a mid-tempo moment that melds together a touch of ‘Joshua Tree’/’Achtung Baby’ U2 with a hint of just exactly how influential The Beatles still are. It’s an impassioned call-to-arms from Rand that highlights his full range, going from a whisper to a scream at the drop of a hat.

The latter stages of the EP begin with the trippy strains of ‘Without Faith’ which includes another sublime, subtle performance from Khoury. It would be interesting to hear his guitar licks isolated as he has a lot going on there in the background. Nothing flash, or overpowering, just a really subtle performance. `You Broke Yourself Again` sounds like it was birthed from a right-here-right-now studio jam and Khoury just lets it flow. Little pieces of wah-wah here and there in a guitar performance that could be described as Gilmour-esque. Rand again excels and Beers does what all good bassists are supposed to do; provide the foundations for the flash bastards in front of him to build upon!

The EP ends with acoustic versions of both ‘Dustbowl’ and ‘Mosquito’, stripped-back, heavy percussive (especially the bass on the latter), and feel-good moments to get the toes tapping. The only burning question is when can we expect the full album chaps?