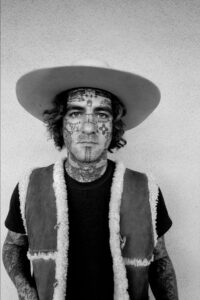 “Don’t let the fact that he looks like an extra from Sons Of Anarchy fool you because Chris Mansfield is a pretty sensitive dude. He doesn’t follow anyone on Twitter, so he’s infinitely more productive and prolific than you are. Sorry.” Noisey

Seattle native FENCES, the alter-ego of musician/songwriter Christopher Mansfield has just shared a brand-new video for the track ‘Boot Height’ now released via ENCI, it was premiered by Substream Magazine over the holidays.

Mansfield said “I was on a four-wheeler once after a friend had died. I rode it to the top of a hill and I saw an elk and steam came out of his nose. When he noticed the hum of my engine his eyes widened and I never forgot that.
Clearly, animals are a great analogy for love and death and the middle part of human experience. The EP feels like this. It was made quickly and with no intention other than to fill the room with something beautiful. It was myself and Dru and Adam. I remember laughter after tracking certain parts. It was a joy, truly. The EP is the middle part and the steam. The elk. ‘Boot Height’ however is the beginning before the beginning. The past life. A love so bold that it transfers. Like when your grandmother comes back as a hummingbird.
The first video for the EP was done by two beautiful artists in New York City. We found some magic in a bicoastal sense that I never really have done before and it gives me more of an acceptance of modern technology. You can see their hands and see the wall being broken. Nothing is a lie. It’s all trying and so are we.”

Perhaps most well-known for his collaborations with Tegan and Sara (who produced his 2010 self-titled debut album) and Macklemore (who he’s teamed up with on various tracks), Fences released his first new LP in 5 years – ‘Failure Sculptures’ – late in 2019, with a Deluxe version available earlier this year.

“We were friends before we made any music together,” we have a lot of things in common – our vices and our demons and our art, the things that we’re good at and our shortcomings.” – Macklemore