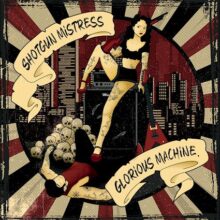 Following the incredible success of their sophomore release Save Me From Myself, Shotgun Mistress’ latest single Glorious Machine is another all-out rapturous sonic assault. Glorious Machine saw the band hit the prestigious Spotify ‘Hard Rock’ Playlist, and has gathered a huge amount of interest, not just in their home country of Australia but also significant global radio play. Glorious Machine has now been immortalised on film with the official video clip being released today.

This latest slice of pure contemporary rock doubles down on the band’s indomitable style. It’s incisive and dynamic with smouldering guitars over an explosive rhythmic undertow crowned by Glenn Patrick’s aeronautic vocals. The melodies utilize a haunting narrative of infatuation and obsession to hurtle through your headspace in a truly dizzying and dazzling hard rock experience. Melbourne’s Shotgun Mistress’ third single Glorious Machine is yet another tantalising taste of their forthcoming album due for release late in 2020.

Glorious Machine debuted at #1 on the Australian iTunes Rock charts as did its predecessor, and both tracks are out now globally via Crusader Records (part of the Golden Robot Global Entertainment Group).