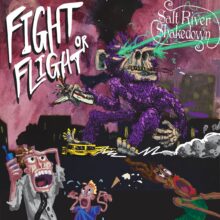 Salt River Shakedown have been tearing down the UK gigging circuit with their energetic brand of blues-rock for the past 5 years. Having played alongside such bands as Anchor Lane, Crobot, The Lazy’s, and US blues-rocker Jared James Nichols, the band have developed a reputation for their explosive live show. With a recent change in line-up, introducing new vocalist Griff, and the success of their most recent single “Sign of the Times” the band are ready to unleash more riffy goodness onto the world with their brand new single “Fight or Flight” which is available now. Check out the video above.

“Fight or Flight” is an energetic and uplifting track, shifting from pounding riffs and beats into a soaring sing-along chorus. It was recorded at Unit 55 and produced by the band’s own guitarist Alek McMillan, and keeping in line with the DIY production of the single, the accompanying music video was directed by the band’s drummer Jake Mackie-Duncan.

“We wanted to make a music video based around recreating iconic movie scenes, using only ourselves as actors, with cheaply made props and a phone camera. The band are big movie buffs and wanted to make something that was a tribute to some great classic movies (and a few not so great). The video took a huge amount of planning and prep to pull off, complicated further by having to work around Corona restrictions. Between time and location issues, and trying not to burst out laughing midway through a take, we eventually pulled it off and we’re so excited to finally share it with everyone.”
– Jake Mackie-Duncan