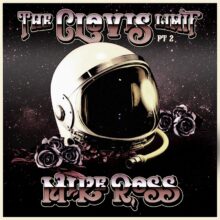 Mike Ross is a musician with many facets. Not only is he a Heavy Blues guitarmeister and a top-tier wizard of fuzz (particularly in the limelight as one third of power trio supergroup RHR), he’s also a talented solo artist, multi-instrumentalist, vocalist, songwriter AND producer. This killer combo of talents has culminated in Mike’s eagerly-awaited, critically-acclaimed album ‘The Clovis Limit Pt.2’. It’s 10 tracks of ‘irresistible Southern-fried goodness’ Includes the hit singles ’None of Your Business’ (Planet Rock playlisted Sept 2020) & ‘Don’t Say A Word’ (Classic Rock top 3 ‘Tracks of the Week’)

Now, Mike Ross is also releasing a specially-made short documentary Today: ‘An Introduction to Mike Ross’ giving an intimate insight into his history, roots, career and creative process; also, the truly crucial, literally life-saving, role that music has played for him. This biographical feature extra is sure to please and fascinate his fans and will also be a valuable watch for other musicians and lovers of rock.

Mike explains why he made the documentary: “I’ve always loved watching music documentaries as I really enjoy finding out my favourite artists’ backstories. My own career has spanned over 20 years but not all of it is in the public domain so I thought I’d create my own short history lesson for fans: ‘An Introduction to Mike Ross’. Originally conceived as a series of 15 short videos to run on social media, this compilation version has brought all of the original episodes together to make one complete work. I hope you enjoy watching it as much as I enjoyed making them: it was really cathartic and interesting to revisit my past in this way!”

Narrated by Mike himself, the slideshow film is like a DVD extra and offers many intimate insights into Mike Ross: the man and the musician. Starting with his birth in Durham and childhood in the North-East of England, Mike tells his tale and, from the first, explains the huge importance that music has played in it.

You’ll hear Mike talk about his career in various bands, then his previous solo releases, such as the Americana-tinged ‘Spindrift’, then ‘Jenny’s Place’, explaining the significance of the track ‘Dark Powder’ on it. ‘Jenny’s Place’ has racked up tens of thousands of radio and streaming plays and Mike has toured it on three different continents.

You’ll also hear him explain how he gathered tracks together for ‘The Clovis Limit Pt.1′ – the forerunner of his latest album, his work with RHR and solo touring.

Mike concludes by explaining ‘The Clovis Limit Pt.2′ and how it’s “got more of everything”, thanks to improvements in his home studio: “The end result is a real monster and I can’t wait to share it with the world!”

The world agrees! ‘The Clovis Limit Pt.2′ is gathering rave press and reviews for the album, and its singles and videos. “Ever shifting and intriguing,” said Fabrications HQ,

For RAWRAMP, “It may be a one-man show, but you’d never guess, from the sheer compass, scope, and breadth of this adventurous mix of open-air blues, arrogant rock, & flirtatious folk roots.”

Powerplay Magazine awarded the album 9/10, calling it “just a brilliant piece of music”. Music-News agreed, noting “There isn’t a bad track here.” They flagged it up as “a must for any rock lovers”, awarding the album 4/5, Planet Mosh gave it a 5/5 and called it ‘an astonishing piece of work’, Great Music Stories also gave the album 5/5 and made the album their November ‘Album Of The Month’, while Metal Talk tagged the album as “Muck and bullets Southern Rock that is dip treated in the Blues…” and Mike Ross as “quite simply an artist you need in your life!”

Check out ‘An Introduction to Mike Ross’ on his YouTube channel above for an honest, revealing, insight into the man and his music, and ‘The Clovis Limit Pt.2′: to experience what Total Rock called “Mike’s constant musical variety, range, and imagination.”

The launch show will be the first full performance of the whole of the new album with special augmented line-up, featuring Jade ‘Like the Stone’ Williams on BV’s AND Stevie ‘Keys’ Watts on organ plus Darren Lee on drums and Dan Lyons on bass. Mike will be broadcasting the whole show using multiple cameras as well as pre-recorded video footage to really make the most of the streaming format. The show will be opened by Brighton heavy rockers ‘The Dead Reds.