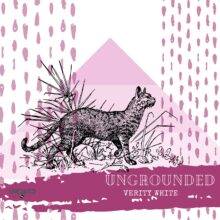 One of the most pleasing aspects of checking out new material from Verity White is that the listener simply does not know what to expect. Cookie-cutters not required here. Copy and paste have been disabled. Or, if you prefer, expect the unexpected, as Verity and Alex White very seldom repeat themselves.

‘Ungrounded’ follow’s on from the ‘After The Storm’ EP which was released earlier this year during the first bout of lockdown, when it wasn’t too bad because, hey, the sun was shining. #Lockdown2 didn’t have the sun so it was the sequel that no-one enjoyed, #Lockdown3 in January will be even worse (think Godfather III), so it figures that ‘Ungrounded’, written and recorded during the second lockdown, comes across slightly darker than ‘After The Storm’. A little bit grungier (especially ‘Mist’ and ‘Turn Myself Around’), with more varying shades.

Four tracks (£5 from the official website, here), or five tracks if you were smart enough to get in on the limited pre-order version and are currently enjoying the bonus track: ‘Clusterfkk’. ‘A Little Bit Of Trouble’ kicks the EP off with a simple, clean, guitar tone that instantly pricks the ears to attention, before the chorus comes in with its infectious earworm moments. ‘Mist’ is the perfect soundtrack to a road trip through Seattle. Another lovely guitar performance from Alex that switches with ease between simple guitar licks, power chords, and big bloody riffs. Verity turns in a staggering vocal performance filled with vocals which at times are both empowering, and fragile: classical/operatic in places, something special indeed. The neat, unexpected change in pace towards the end of the song is a nice touch. ‘Strange Times’ is something special indeed, a real slow-burning gem of a track, which, if you are listening to it on decent cans, you pick up so much more. Chimes, layered guitar solos, ghostly, whispering backing vocals: get some Sennheiser’s mate, the crisp production deserves it. The ’90s alt-indie-grunge tones of ‘Turn Myself Around’ brings the EP to an end, and like ‘Strange Times’ before it, pay attention to everything going on, and the track is enhanced ten-fold. The only thing left to do is hit “repeat” and lose yourself in the music.

Verity’s vocals are as alluring as always and in the same way that far too many young male vocalists try and emulate Myles Kennedy or Chris Robertson, too many female vocalists these days overreach by trying to copy Lzzy Hale. Verity White doesn’t aim for Hale, or Kennedy or Robertson for that matter: instead, think the range that Skin from Skunk Anansie still has to this day, the soaring power and emotion of Shirley Manson from Garbage, all wrapped up with the alt-pop sensibilities of an artist like Kesha. Imagine Verity White being added as local support to the Blondie/Garbage arena tour in 2021? “National Treasure” status awaits.