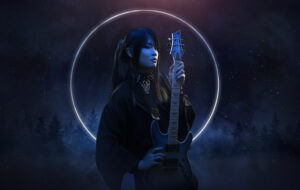 Esprit D’Air have premiered their new music video, “Leviathan” with Loudwire, check it out, above.

Crowdfunded by fans, “Leviathan” is a song about change, melancholy, and hope in a world devastated by a global pandemic. About the release, vocalist and producer Kai says:

“We interpreted “Leviathan” as a huge power or impact beyond human power or knowledge. When we wrote this, we were thinking about how significantly our world has changed with the pandemic and how we can think positively and have hopes in tough times. Through our composition and songwriting, we tried to express lights of despair, human weakness and stupidity, and human wisdom to build a new world.”

As featured on Billboard, Loudwire & Japan Today, Esprit D’Air recently celebrated their 10th anniversary with a theatrical virtual performance to their fans at home. The show was broadcast live from KK’s Steel Mill, with lighting and special effects provided by Jon Smith (DragonForce, Bowling For Soup).

Esprit D’Air is an award-winning melodic rock and metal band based in London. Their critically-acclaimed debut album crowned them as winners in the best metal/hardcore album of 2018 at The Independent Music Awards at the Lincoln Center, New York, among an esteemed judging panel featuring Amy Lee (Evanescence), Slayer, Sepultura, Tom Waits, and more.