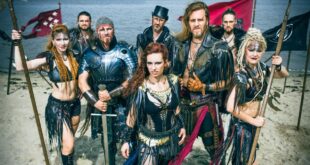 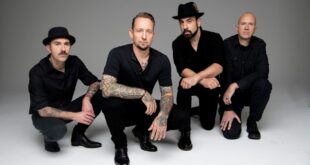 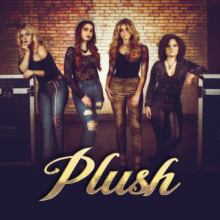 What a whirlwind six months or so it has been for new American hard rock outfit Plush since lockdown was lifted and some sort of normality returned. Shows with Seether and Nonpoint, live dates with Wolfgang Van Halen on his maiden voyage as Mammoth WVH, and next week they open on the much-anticipated Evanescence/Halestorm co-headlining tour. If all that wasn’t enough; they will also open for Slash featuring Myles Kennedy & The Conspirators in early 2022. That’s impressive company to keep, and somehow amongst pandemic restrictions, the four-piece managed to record their self-titled debut album which is set to land October 29th on Pavement Entertainment. 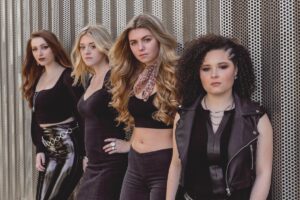 The buzz surrounding Plush is mostly word-of-mouth and whereas in days gone by, music fans would send tapes to each other to spread the word about a new band, nowadays it’s all just a click away, and before the formation of Plush was even announced, two YouTube videos featuring band members were being shared across social media usually accompanied with the words “you have to see this”. First up, frontwoman, singer/songwriter, and guitarist Moriah Formica blew minds with her perfect cover of Heart’s ‘Crazy On You’ for America’s version of The Voice. Then, April 2020 saw Moriah team up with drummer Brooke Colucci for a jaw-dropping cover of another Heart classic; this time ‘Barracuda’. The die was cast, and there was no turning back. The seeds of Plush were sown. Enter two more exceptional musicians; lead guitarist Bella Perron, and bassist Ashley Suppa, and Plush were now a band. It’s difficult to talk about Plush without mentioning the fact that all four members are under the age of 21, so there you go, all four members are under the age of 21. As Aaliyah said: “Age Ain’t Nothing but a Number”, you are either good enough or you are not. And Plush are good. Plush are very good. And now, the modern hard rock world is about to be blown away by the debut album from Formica, Colucci, Perron, and Suppa. And by simply naming it ‘Plush’, the girls have made a bit of a statement, ably backed up by the content found within.

With Myles Kennedy in full-on Slash-mode, and Mark Tremonti currently melting faces with his Tremonti project, Alter Bridge fans might be needing a bit of a fix, and they could do worse than turning their attention to Plush. Album opener and current single ‘Athena’ is chockful of Alter Bridge-Esque moments that should have anyone hankering for some Tremonti-sized riffs purring with delight. The sweeping arrangements are towering and the backbone of the band, Colucci, and Suppa sound like they have been a team for years rather than months. The bending guitar riffs are monstrous and even with the volume cranked all the way up, the expert production from Johnny K (Staind, 3 Doors Down, Disturbed) means that Formica’s powerful vocals are nothing short of crystal clear. Continuing with an Alter Bridge vibe, debut single ‘Hate’ begins with a cacophony of razor-sharp riffs and chunky grooves that could be straight out of Florida. Moriah’s vocals are the star of the show, but those short, explosive jams where the band takes off, run them a close second. ‘Found A Way’ thrills with its uptempo, commercial sound, and huge melodic guitars, and along with ‘I Don’t Care’ provides some of the lighter moments on the album. A strong Halestorm influence here and there on both (ditto ‘Better Off Alone’), especially the audience participation-in-waiting segment of the latter, and if you can isolate Brooke Colucci’s drum sound, you will discover how much of a shooting star she is – stunning drum work. 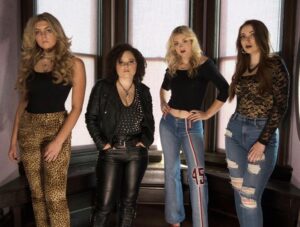 ‘Sober’ makes an early case for the standout track on the album. A gorgeous acoustic guitar tone shepherds in a gentle touch from Colucci, which soon gives way to a slow-burning epic track that should knock crowds for six on the Evanescence/Halestorm tour. The track has so much going for it, especially the impassioned vocals from Formica which get better with each listen. Before you know it, you’ve repeatedly hit rewind and are on the fourth straight listen. The interesting intro to ‘Why Do I Even Try’ brings a quirkiness with it, and it’s great to hear a hard rock band mixing it up by adding some pop sensibilities here and there. Loving the subtle backing vocal harmonies featured throughout; very effective, as they are on the smoldering ‘Bring Me Down’. ‘Don’t Say That’ is another standout moment on the album, a power ballad to an extent, but one that packs a bit of a snarl. One of those tracks that make you sit up and pay attention. Closing track ‘Walk Away’ sinks its hooks in early on and doesn’t let go. Each band member is given their chance to impress, and don’t they just. Special mention needs to go to the sublime bass licks from Ashley Suppa which are non-fussy but crucial.

Weighing in with thirteen tracks, ‘Plush’ is a lengthy affair, but never feels as if it is dragging something behind it. At times the standard of playing on display from these four young musicians is staggering. The only cause for concern is the tendency from the media and fans alike to talk up a band and make some spectacular predictions for the future, only to then knock the same band back down again – Greta Van Fleet being one such band. Plush seem to have a great handle on what is developing around them and are no doubt keeping both feet firmly on the ground, the songs and talent are already there, they just need time to develop as a unit, time to grow without huge expectations heaping the pressure on – ABC News/Associated Press declaring that “Plush are the future of rock” doesn’t help – but being under the watchful eye of the much-respected Pavement Entertainment certainly does help.

Find out what all the fuss is about, here.