Bad luck meant that live gigs in support of his late-2019 album ‘Who Feeds The Wolf?’ were postponed, but blues-rock guitarist and singer-songwriter Jack J Hutchinson kept busy during the lockdown by working on new material and keeping himself in the public eye through the release of the live album ‘Who Feeds The Lockdown?’. Now that some sort of normality has resumed, the live music industry has been able to start up again, albeit somewhat cautiously, and Jack is finally able to get back out there and do what he does best – perform live. There is a brand-new album on the horizon, ‘The Hammer Falls’, and Jack (alongside one of the tightest rhythm sections that you will encounter today) is putting in the miles as he brings the noise to venues up and down the country, including tonight’s debut headline gig in Scotland, at Bannermans, Edinburgh. And all on the day that his beloved Manchester United got pumped at home by arch-rivals Liverpool. 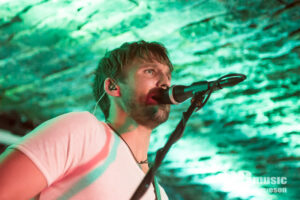 Joining Jack on the bill are South Devon-based modern rock trio Firekind. Yes, you read that correct: “South Devon-based”. South Devon to Edinburgh for a gig, and then back home again straight afterward. 16 maybe 17 hours round trip to play a gig. It kind of puts to shame all those that complain about bands not playing along the road from them; Kris Barras recently raised this very point on his Facebook page, and it certainly made for a lively debate. If Firekind were road-weary, then it never showed as they set out to make every minute on that stage count and provide something a little bit different. 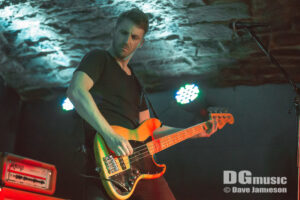 Consisting of brothers Jas (vocals/guitar) and Dan (bass) Morris, along with touring drummer Mitch Pike, Firekind are an intriguing proposition. They put on a show that might find you picking up suggestions of a Muse influence, and when they spread out musically – the progressive background of Jas and Dan certainly comes through. Not full-on Dream Theater-Esque widdly-widdly shenanigans, but at certain points the trio lock into a groove where you have no idea where the song is about to take you, and you don’t mind. Set-opener ‘Adrenalin’ (which also opens the current album ‘What I Have Found Is Already Lost’) is a snarling, bass-driven beast that comes thundering out of the traps complete with impassioned vocals, and all-conquering riffage, both from Jas. ‘It’s Not Over’ is magical. No other word for it. Magical. Shades of Biffy here and there, the changes in pace, and the gradual build to a short guitar solo are immense, but it’s the crystal clear vocals from Jas that long linger on after the song fades out. Set closer ‘Sound of Rain’ gives Mitch Pike a chance to shine with his impressive skills behind the kit on a track that really is tailor-made for the arenas or a festival like the Isle of Wight Festival. Its soaring hooks are to-die-for, and (as bizarre as it might sound) tone the guitars on this one down a tad, dampen the drums a notch, and the Morris brothers could flog this one (along with ‘If There’s Any Reason’) to acts like Coldplay, Bastille, or Imagine Dragons and then sit back and watch the royalties roll in…but that would mean tearing the heart out of the song, so maybe not. But you get the picture, right? There is a quality and feel to Firekind’s songs that cross borders and break down barriers, all they need is someone at the major commercial radio networks to take the blinkers off. 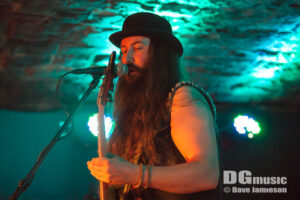 Before the lockdown, Jack J Hutchinson was one of the busiest musicians around. Always on the go. Always recording. Always gigging. Then that was snatched away from him just as he was celebrating a new album; the masterful ‘Who Feeds The Wolf?’. Putting his time during lockdown to good use, Jack has kept recording, and released some belting new tunes, the latest of which, ‘Straight To Hell’, lands on Friday, October 29th. For now, though, fans of the London-based Burnley lad can enjoy an upfront blast of material from the forthcoming album ‘The Hammer Falls’ well before its 2022 release date, and as nature intended them to be heard: up close and personal. Consider it an early Christmas present from Jack to his many fans who have been patiently on the new album.

Jack J Hutchinson does not sound like he looks. The long hair and beard, all clad in black, bowler hat, denim cut-off; you could be forgiven for expecting a voice similar to Orange Goblin frontman Ben Ward to come booming out of the PA once Jack opens his mouth to sing. Instead, what does come out is a surprisingly clean, soulful voice full of emotion and power. Full of life. A storyteller’s voice that sparks an instant flicker of recognition from anyone that comes into contact with it. He can also play the guitar like he was born with one in his hands. With two larger-than-life chaps alongside him in Laz (bass) and the total beast behind the kit Felipe, Jack puts the power in “power trio”. 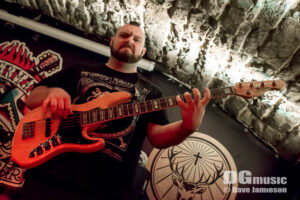 Much of the material aired on the tour comes from the aforementioned yet-to-be-released album ‘The Hammer Falls’, and as Jack explained near the end of the gig, the album is delayed because he wanted to add one very special track that was recorded with the help of someone very famous. Since Jack is teasing fans on social media with titbits of information leading up to the official announcement on October 29th, we won’t spoil the surprise, we will say, however, that the track in question is rather special indeed, and worth the wait. Of the new material that fans might already be familiar with, ‘Call Of The Wild’ sounds way heavier live than it does on the studio recording, the guitar work is stunning, and at times it’s almost like the guitar is singing, especially during the solo midsong which, to these ears at least, has a hint of Billy Duffy about it. And on the strength of hearing the impending single ‘Straight To Hell’ live and in the flesh, this one is going to go down rather well when it lands. As will the staggering title track which certainly packs a punch or two. 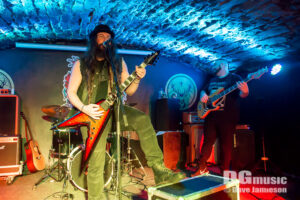 Of the previously released material, ‘Sleep, Wake, Obey!’ is still bloody great fun! Thanks in part to the glam drum sound from Felipe during the intro, it’s one of those songs that makes you smile, and for obvious reasons it comes with some audience participation which has Jack joking “…don’t worry, it’s not Freddie at Wembley you know…”. One of the highlights of the night comes in the shape of ‘I Will Follow You’, which as Jack explains, he doesn’t play that often as it’s about his dad’s battle with Alzheimer’s. An acoustic track where you really could hear a pin drop as Jack performs it, packing an emotional punch, it is a poignant few minutes. Jack tells a heartwarming story about how his dad would always drive him to his gigs and help out, joking that you could often find him at the back with a whisky in his hand, heckling Jack! In fact, at one show when he was jokingly heckling, Jack heard one punter turn to another and ask if had heard the wanker at the back! Absolutely brilliant story; just one of many that Jack tells over the ninety minutes or so that help break down that invisible barrier between the performer and the fans.

Once the set ends, it’s all smiles from the trio who head over to the merch desk to sign whatever is thrust in front of them. A fantastic evening of music from two bands who got into a van and put in the miles to put on a show. And we didn’t even mention Jack’s blistering cover of ‘War Pigs’ – tsk, tsk.