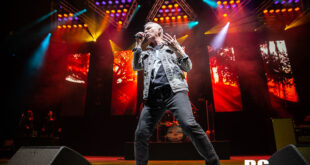 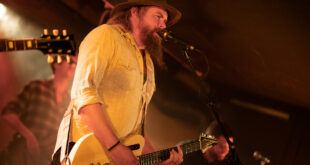 Tonight’s show, and the entire tour for that matter, is all about the triumph of two quiet and unassuming artists. Two artists blessed with such insane amounts of talent that they would be forgiven if they decided to go against their nature and let the adulation get the better of them and act like a pair of primadonnas. Or for those in the UK – act like a pair of Billy Big-Balls.

The headliner, Myles Kennedy; arguably one of the top three vocalists in rock today (Ann Wilson and Floor Jansen being the other two…), someone who constantly strives to better themself on each recording, and someone who stripped away the high-end production values and the stack of Marshalls to create a debut solo album of such heartbreaking intimacy that the listener felt that they were being spoken to directly. Then there is the small matter of the opening act; Cardinal Black, and their guitarist Chris Buck. When you not only have the respect of your fanbase, but also your peers – and in some cases your idols – then it must be quite difficult to stay grounded, but the young Welshman manages it with ease. Slash rates Chris Buck, as does Joe Bonamassa, and Myles Kennedy, so much so that he takes time out tonight to pay tribute to Buck’s skills. And you could tell that he meant every word. Pass either Kennedy or Buck on the street and chances are you would not give them a second glance as nothing about them screams “rock star”. Put them on a stage though – in their natural environment – and all bets are off. 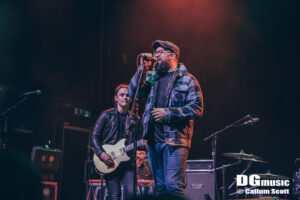 In the case of Cardinal Black, some things really are better the second time around. Dissolving in 2010 after an attempt to break America – with the help of Guns N’ Roses manager Alan Niven – didn’t pan out the way that was intended, the trio of Chris Buck, Tom Hollister (vocals), and Adam Roberts (drums) recently started making music together again, and with bassist Sam Williams coming on board, Cardinal Black were once again making people sit up and pay attention. Opening for Myles Kennedy is a perfect match, and the soulful brand of rock that Cardinal Black offers up is well-suited to an audience that has come to listen intently, as well as soak up the music on offer. Vocalist Tom Hollister is a wonderful revelation; warm, rich vocals heaped to the brim with feeling, one of those vocalists that make you pay attention as you don’t want to miss anything. It helps that he looks at ease on stage in a large venue, swigging from a bottle of beer as he jokes about how he screwed up by keeping his warm jacket on. Sharing a stage with Chris Buck must be daunting as most of the attention is going to be focussed on the soft-spoken guitarist, but Hollister more than holds his own and when he delivers a powerful performance on the hot-to-trot debut single ‘Tell Me How It Feels’ – all eyes are firmly on him. Chris Buck? One of the best guitar tones around today, and in a world of noodling, shredding, and over-playing, he possesses a particular skill that is in short supply today…restraint. Why play ten notes when one from Buck will drop a charging rhino? Keep an eye on these guys… 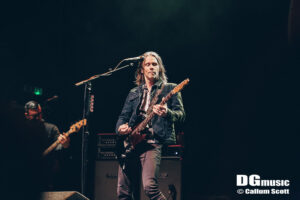 If there is a more humble performer than Myles Kennedy out there playing at this level, then who is it? An arena-headlining artist with both Alter Bridge, and Slash featuring Myles Kennedy and The Conspirators, Kennedy has the rock world at his feet, but when he walks out on stage with his buddies Tim Tournier (bass) and the absolute beast on drums that is Zia Uddin, he is just one of the guys. He’s happy to be doing what he was put on this earth to do: play music. And the grin on his face, as he steps to the front of the stage to take his guitar solo on opening track ‘Wake Me When It’s Over’, is delightful. One of those hopeful, reassuring grins that make you think that things might actually be getting better, that we stand a chance of getting out of this modern-day nightmare. And for ninety-magical minutes the noise of the outside world was blotted out by some magical storytelling. 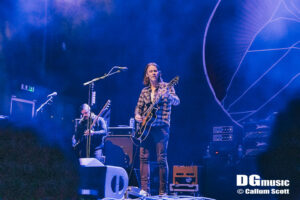 With two successful (and differing) solo albums under his belt, Kennedy has plenty of material to choose from. 2018’s debut ‘Year of the Tiger’ was a deeply personal affair which in places left the listener in pieces on the floor before picking them back up again and offering some hope, and with the band behind him, songs such as the mesmerizing ‘Love Can Only Heal’ become epics on another level. Kennedy’s vocals on the fragile intro to ‘Love Can Only Heal’ fill the room, and while it’s just Kennedy with his guitar for the first few minutes, once Tournier and Uddin join in moments later…it is goosebump-inducing…and the guitar solo from Myles Kennedy simply reinforces the long-held opinion that he does not get half of the recognition as a guitar player that he deserves. ‘Love Can Only Heal’ and ‘Devil On The Wall’ are fleshed out with the band flexing their muscles and stretching out, as they do on the showstopping version of ‘Haunted By Design’ which comes complete with this monstrous killer jam midsong that sounds as if the band are about to break into a cover of Them’s ‘Baby Please Don’t Go’. Search for a live version of it on YouTube and sit back and purr with delight. ‘Turning Stones’ is another highlight, thanks to the percussive-heavy intro from Zia Uddin who is positioned on the stage-left side rather than the traditional center-stage position normally associated with the drummer; and what a kit he is battering the living daylights out of…oh my giddy Aunt it is beautiful. Uddin is singled out for a special mention from Kennedy for introducing him to “the devils liquid” when they played together decades ago in The Mayfield Four, and when Kennedy fondly remembers how they used to get drunk and dream of playing all over the world, he adds with a heartwarming smile how much it means to him that he was able to make those dreams come true and bring Uddin along with him for these overseas dates. 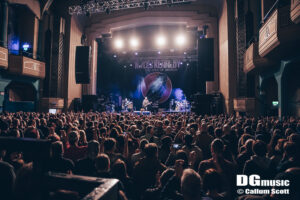 As you might expect, the new album ‘The Ides Of March’ is well represented, and throws out a few gorgeous examples of how varied the album is. On one hand, there is the subtle, restrained ‘Moonshot’ which Kennedy mentions was the first song written for the album and was birthed due to Alter Bridge being off the road, and then there is the big-ass Zeppelin vibe on ‘Get Along’ which simply sizzles. Although the Delta blues arrangements on ‘World On Fire’ are pretty damn special, it’s a testament to Kennedy’s songwriting skills that in a set that dips into both his Alter Bridge and SMK&TC catalog that the moment that is still lingering on at the time of writing is the killer one-two of Kennedy material in the shape of ‘Year Of The Tiger’ (great Fleetwood Mac ‘Tusk’ vibe from Uddin on this one) and ‘Tell It Like It Is’. Ten minutes or so of sheer bliss…

Myles Kennedy continues his ‘The Ides Of March’ tour in Manchester on the 9th of December, then London on Saturday 11th of December, Birmingham on the 13th, and finally Bournemouth on the 14th of December. Treat yourself to an early Christmas present and buy a ticket, this is a show to remember. Tickets are available, here.