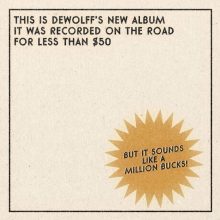 As far as attention grabbing strap lines go, the one pushing the latest release from Dutch psychedelic rockers DeWolff really does say it all…“This is DeWolff’s new album it was recorded on the road for less than 50 Euros….but it sounds like a million bucks!” Considering that 50 Euros doesn’t exactly get you much these days (a round of drinks in Dublin perhaps, as long as no-one orders shots), it’s testament to the inventiveness of DeWolff that not only did they bring the album in at such a low cost, but they still managed to make such a strong album.

Here’s the all important details of how they managed to make the album for next to nothing. ‘Tascam Tapes’ was recorded on a Tascam Porta Two, a four track cassette recorder from the 1980’s. The only equipment they used was a sampler with some rare soul and funk sampled drum beats loaded in by drummer Luka van de Poel, a battery powered synthesizer and a guitar, all plugged directly into the recorder. No drum kit, no Hammond and no guitar amps. Simple really. But, somehow, yes it does really sound like a million bucks.

12 tracks with a combined running time that just tips over the 30 minute mark, ‘Tascam Tapes’ is an album that doesn’t overstay its welcome. Opener ‘Northpole Blues’ hints at a traditional Blues/Gospel path, but then the gonzo synth breakdown towards the end shakes the listener out of their comfort zone. Just as you are thinking “what the hell was that?” and more importantly was it deliberate, along comes the cool funk breeze of ‘Blood Meridian I’, imagine The Black Keys jamming with Beck and you are almost there. ‘It Ain’t Easy’ is so cool that it doesn’t walk, it glides. At just over three minutes in length, this gem includes a simple disco-esque strut and a Bee-Gees-without-the-helium vocal performance from Pablo van de Poel. Sounds ridiculous right? It works though, it really does.

‘Rain’ is simply blissful, so light and dreamy that it floats, the simple twang from what sounds like a lap-steel guitar is highly effective, don’t drive with this one playing in the car. ‘Let It Fly’ is more uptempo, with a gorgeous fat groove throughout, which continues on ‘Blood Meridian II’, but with the addition of some fuzzy as hell riffs and an ultra cool synth sound. ‘Awesomeness Of Love’ doesn’t even hit the two minute mark, but what it lacks in length, it more than makes up for in the quality department. The riffs are to die for. Then there is the cinematic undertones of ‘Love Is Such A Waste’, the track that both Tarantino and Guy Ritchie let slip through their fingers on the soundtracks to their respective recent projects. The soul-vibe is strong on this one, as it is on the sublime ‘Am I losing My Mind’ where Pablo van de Poel unleashes his inner Al Green.

At times ‘Tascam Tapes’ comes across as a more lo-fi version of The Black Keys, but if the true definition of “lo-fi” is “low quality”, then that description is a bit erroneous. But the trademark Dan Auerbach less-is-more idealism is very prevalent on ‘Tascam Tapes’. So much so that someone at Mascot Records has surely tipped off BBC Radio 2 about this album?