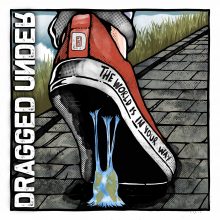 Friday, January 10th, 2020 – With mammoth riffs, enormous, hooky choruses and undeniable punk rock velocity, Seattle’s DRAGGED UNDER are set to light the fuse on 2020 when they unleash their debut album, ‘The World Is In Your Way’ on January 17th.

Bridging the gap between mosh-pits and enormous radio friendly sing-alongs, DRAGGED UNDER have already released 3 singles: ‘Here For War’, ‘Hypochondria’ and ‘Chelsea’, clocking up highly impressive streaming numbers in the process with over 1 million Spotify streams, over 180k YouTube views and over 421k combined social media followers to date.

Produced by Hiram Hernandez at Earth Says Studios in Arizona and mixed/mastered by Matt Good, ‘The World is In Your Way’ is the freshman release from DRAGGED UNDER and blends punk grooves, massive crushing riffs, and huge chorus hooks that are guaranteed to get stuck in your head for days. Combining the punk rock vibrancy of early Sum 41 and world beating choruses akin to the likes Beartooth and A Day To Remeber, the album is an all-killer-no-filler collection that perfectly combines heavy with melody and honest, heart felt lyrics.

DRAGGED UNDER will also be hitting the road supporting The Used later this month. Kicking off on January 21st in Solana Beach, CA, the sold-out tour will hit a further 19 stops before culminating in Phoenix, AZ on February 22nd. They will also be headlining select dates across the run on their ‘No Days Off’ Tour. Full Dates Below.

* No Days Off Tour Date – Headlined by Dragged Under.

Connect with Dragged Under here.