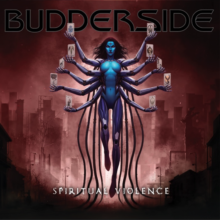 The Motörhead connection is strong with Los Angeles-based Budderside; the band was signed to Motörhead Music by Lemmy (RIP) himself, frontman Patrick Stone used to roadie for the iconic trio, and one of those icons – Phil Campbell – plays on this, their sophomore effort. Anyone expecting to be steamrollered in the same way that Lemmy, Phil, and Mikkey would pummel an audience, will be in for a surprise, but although ‘Spiritual Violence’ is pretty far away from the Motörhead sound, it still rocks out and the end result is a damn fine rock & roll album.

Opener ‘Wide Awake’ is the traditional fast-paced opening track, and it comes complete with a Slash-sized swagger to the riffs, and a hint of an M. Shadows influence on Patrick Stone’s vocals. A fantastic way to kick-off the album. The variety begins on ‘Zen’, and with a title like that, you know that it’s going to be kinda groovy – and it doesn’t disappoint. Fuzzy, big-ass Zakk Wylde-like guitar tones, dreamy T-Rex-meets-Def Leppard vocals from Stone, and multiple changes in pace with some kick-ass guitar solos thrown in; a very, very strong track. With its creepy vibes and slow, sinister vocals ‘Amber Alert (feat. Carla Harvey of Butcher Babies)’ continues to mix things up. Carla pops up throughout the track and delivers her customary mix of clean and harsh vocals with aplomb. Listen to this through a decent pair of cans and you might just pick up some Predator noises around the 1:20 mark. Kinda freaky. 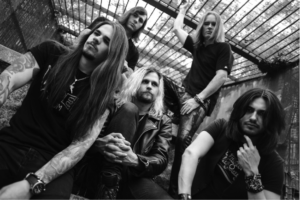 The variety amongst the tracks continues with ‘Pardon Me (feat. Phil Campbell)’ which mashes up a QOTSA-like throb with a hook-laden slice of commercial rock & roll. With cool soloing and neat guitar licks, Phil Campbell does what Phil Fucking Campbell does and makes it look effortless. If you are going to tackle ‘Folsom Prison Blues’ then you are either going to sink or swim, there is no middle ground, and after a low-key false start Budderside knock it out of the park, a real toe-tapping, shit-kicking moment expertly controlled by the stellar drum work from Jeff Dewbray. ‘Things We Do (feat. MUSYCA)’ cleanses the palate with a floating, dreamy Enuff Z’Nuff-meets-Travelling Wilburys vibe throughout the earlier stages, and the introduction of the MUSYCA Children’s Choir is a nice touch. ‘Soul Searches’ is an interesting track; part Foo Fighters, part Avenged Sevenfold, part GNR, with a trippy aura surrounding it, great hooks and melodies on this one.

‘Spiritual Violence’ is an album from a band brimming with confidence, the kind of confidence that comes from knowing that you have delivered the goods. Keeping the album at ten tracks ultimately helps, for there is no room for filler material to creep in; instead, it’s one banger after another, on an album fully-loaded with heaps of variety.