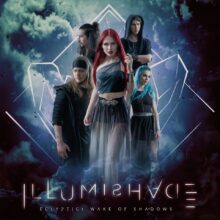 The specials in the experience include:

ILLUMISHADE is a new musical project created by Eluveitie vocalist Fabienne Erni alongside her band-mate, Eluveitie guitarist Jonas Wolf. The fully immersive project allows the listener to join one of five tribes and explore a musical world full of magic, mystical beings, ancient rituals, sacred traditions, and beautiful landscapes. With no label support, and funded via a successful crowdfunded campaign, ILLUMISHADE released their debut album ‘ECLYPTIC: Wake of Shadows’ earlier this year.

Check out our interview with Fabienne here.