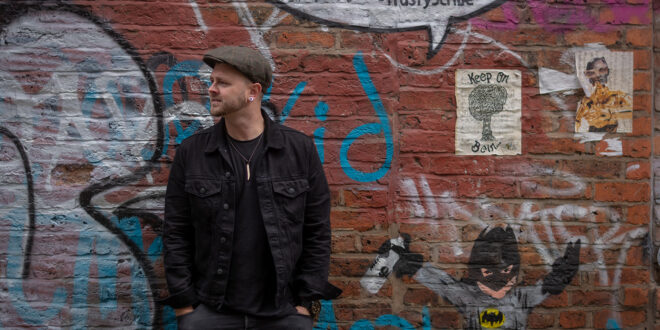 Manchester-based musician Ellis Johnson is the latest to fill in the blanks on our “Introducing” feature, check out Ellis below… 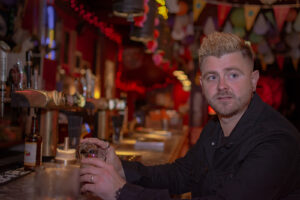 I’m a solo artist, and I’ve been active around the circuit for about 10 years, but I’ve also been playing in bands and all sorts of stuff along the way, for a lot longer than that!

I can’t even remember my first performance! I was playing drums in a punk/rock/metal-ish band, kind of Foo Fighters, Incubus inspired. I was about 15 or 16 at the time. My first gig as a solo artist, probably came when I started running an open mike night in the city centre of Manchester, I was thrown in at the deep end, and had to open the night, and play in between some of the acts. It was there that, Guy Garvey from Elbow, heard me playing, and was very complimentary.

Just try and imagine Miles Davis playing Coldplay covers in a metal style. To be honest I’m open to suggestions! I’m a singer-songwriter, and I write music based around the acoustic guitar and piano. Then I develop ideas from there, I guess you could say it fits within the indie/pop-rock bracket.

I think it’s important to just try and be yourself, and express your music in that way. There isn’t really much out there anymore that’s unique, and some of the acts that are aiming to be unique just end up sounding a bit weird to me. The precedents have already been set, we’re not trying to reinvent the wheel, just use your own Influences from things that inspire you, and try and illustrate that through your songwriting. If it’s true enough, people will like it. In terms of vocals, it’s important to develop a style that suits you and you’re comfortable with, play to your strengths stay away from Céline Dion.

I never stop writing, to be honest, I’m writing every single day, some of the ideas end up being in a load of shit, some end up being the foundations of an idea I can decorate and present something I’m proud of. It’s important to keep them ideas going when they are present. You can check out my music on Spotify, and all the usual music platforms. And I would be very happy if you did!

Tough one. In the current climate, I’ll be playing in an empty room. But it becomes down to a setlist issue because I could list several bands that I could play before, and play all my relaxed stuff, and leave out some of the really upbeat stuff, and vice versa. I recently opened up for Max George from the Wanted, who is currently in Strictly Come Dancing. But I’ve also opened for acts that are quite rocky and indie. I’d love to open for a Gang of Youths, Phoebe Bridgers, and definitely, Elbow.

I’m not aware of any that are locked up. And I’m not sure, to be honest, it’s quite unpredictable, I’ve seen acts on the scene that I never would have imagined becoming popular, and I’ve seen some ridiculously talented artists that are still scraping at the periphery of success.

I don’t want to sound all cliche and cheesy, But I guess I’ve always known that wanted to be a musician. My mum said she would come in the living room and see me watching music videos, and I would be singing backing harmonies along to the tracks, without knowing what I was really doing, it just sort of felt right. My dad always wanted to be a drummer, and from that, he got me into bands like Led Zeppelin, I was a massive Bonham fan, still am! I started playing drums around the age of 10 or 11, and moved on to bass guitar and piano since, and obviously singing.

I can’t remember! It’s been so long! I saw Bon Iver and Phoebe Bridgers, I also saw my favourite punk band The Flatliners! I can’t remember when and which was first!

Luckily I’ve got quite an open eye and open ear for music, and a lot of people know that. I’ve got everything from ice cube to Ariana Grande to Foo Fighters and Pantera! One album that always sticks with me from being a kid, was the live album by Nirvana, From The Muddy Banks… That album blew me away as a kid and still does for its raw intensity, and Grohl’s playing.

I might have beans on toast and think about all the gigs I could’ve done. And I’ll continue writing as much as possible along the way!

I’m pretty active on it! You have to be in this day and age! I sound like an old bloke! You can get me on Instagram @ellisjohnsonmusic and the same on Facebook.

Previous Introducing: FreeDivers
Next ILLUMISHADE: ‘Into the Unknown’ (Disney Cover)