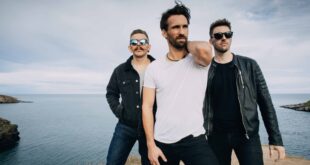 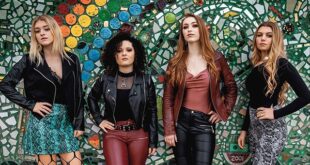 London based trio Black Orchid Empire have just released their dazzling new album ‘Semaphore’, vocalist/guitarist Paul Visser filled us in on the recording process, as well as the concept behind the album. 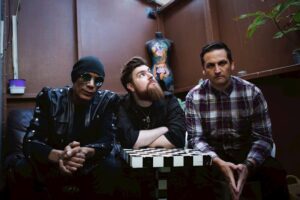 DGM: New album ‘Semaphore’ has just been released; what was the gestation period of the album like?

PV: The album came together very organically; we always make a point of recording riffs and ideas whenever they happen – we already have a bunch for the next record! This was the first time that we had all sat together in the control room of our studio (The Recording Studio, London), and developed ideas together without jamming. Dave or I might have a riff, Billy would come up with a drum pattern that we would programme, then tweak until it was perfect; we all just bounced ideas around until it took shape. Then when the demos were all fully formed we re-recorded almost everything.

DGM: The sci-fi concept behind the album is really interesting. Who came up with it?

PV: I had the idea of a central theme that took me away from having to write from a real life perspective. Using a concept allows a lot of lyrical freedom, and we’re all huge sci-fi nerds! I especially love the writers Iain M Banks and Richard Morgan, and a lot of the ideas on ‘Semaphore’ were inspired by various books of theirs as well as movies.

DGM: The album opens with a short intro, ‘Emissaries’. Is there a slight homage to Kubrick’s ‘2001: A Space Odyssey’ in there?

PV: Absolutely! We specifically tried to recreate the feel of those classic early sci-fi movies. In fact that film was mentioned a few times during the design phase of the artwork too. The VO is an absolutely incredible job by Billy.

DGM: By my calculations, ‘Evergreen’ was the first single to be released from the album. What was it about that particular track that made you pick it as the first single? And when you are gearing up to release the first music from a new album, do you get nervous at all?

PV: Absolutely! We had no idea if anyone would understand what we were trying to do, we just knew we loved the record! It’s funny, we wrote ‘Evergreen’ as a total album track – it’s so self indulgent! It has like 1:30 of instrumental in the middle. But as soon as our label manager, Manuel, at Long Branch heard it he said “that’s the first single”. We thought he was joking! It turned out to be super popular though, which is awesome. He was right!

DGM: Were you able to road test any of the new material before lockdown?

PV: We actually wrote and jammed the riff from ‘Death From Above’ as early as the Yugen tour in May 2018! But yeah, we deliberately included lots of the songs in our set as soon as we completed them. ‘Singularity’, ‘Motorcade’, ‘Evergreen’ and ‘Death From Above’ have all been played live a few times. In fact we were able to include ‘Winter Keeps Us Warm’ on our tour with Skunk Anansie – playing it at a sold out Brixton Academy was a decent test! 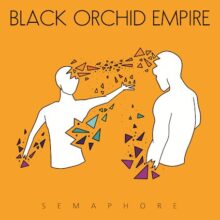 DGM: Do you ever revisit an album once it has been released, or do you put it behind you and move on to the next?

PV: It’s hard because we self-record, self-produce and I mixed the album. The only objective presence was Ermin Hamidovich, who’s our brilliant mastering engineer. You get so obsessed with every detail it starts to suck out the enjoyment. However, by the time it comes out it’s been a while since it was completed, so I’m actually loving it again now. It’s the same for anything we produce really.

DGM: Debut album ‘Archetype’ was released in 2016. In what ways has the band developed since then?

PV: Oh wow, so much. We started to write the songs on there back in 2012, so they feel very basic to us now. That’s just the result of pushing ourselves to explore new things I guess. There are some songs I’m really proud of still – ‘Mountain’, ‘God Is Awake’, ‘Riff Of Death’, etc – but we’ve definitely come a huge way, production wise. Our touring experience has evolved a hell of a lot too. The big stages don’t seem so alien any more!

DGM: The rhythm section of a band is crucial. In Dave and Billy, Black Orchid Empire has an enviable backbone. How long has the engine room team been together?

PV: We all played in Cape Fear before BOE – Dave and Billy have been working together since 2008. They are the most amazing unit – most guitarists don’t realise that without a killer rhythm section they are nothing. I’m very lucky!

PV: It is! And don’t worry, we’ll recoup eventually haha! In all seriousness you can’t compare Spotify streams to physical revenue. Each play is only one listen – a CD might be listened to hundreds of times. One play on a national radio station might reach nine million people! It’s a different platform, and we’re extremely thankful it’s enabled us to reach new fans who would never have heard of us otherwise.

DGM: Hopefully the joint headline tour with Exist Immortal, rescheduled to October, will still go ahead. How long have you known the EI guys for?

PV: We’ve actually never met, although we have lots of mutual friends and I’ve been aware of them for ages. Wicked band! Yeah we’re pretty confident it will go ahead – keeping fingers crossed!

DGM: When lockdown was announced, what was the first thing you stocked up on? Booze or toilet paper?

DGM: Good choice! On the subject of lockdown, what was the last gig you attended as a fan before lockdown?

PV: We nearly attended the last show of our short tour with the brilliant Defences – but it was cancelled due to flooding! Remember when that was our biggest problem?

DGM: The floods and storms were a sign of the impending doom that was on its way! What album do you have in your collection that would surprise most people?

PV: Oh I think most of them would! I’m a big classical music and jazz fan. There’s a fantastic record by the Tord Gustavsen Trio called ‘Being There’ which is a personal favourite.

DGM: What particular issue today do you feel passionate about?

PV: Honestly, we live in a post-truth society where power has been tacitly given away to a tiny group of individuals with seemingly total moral turpitude and a complete lack of accountability in any case. There are so many things I see that leave me dumbfounded.

I think you can distil all of the hideously divisive issues we’re presented with daily down to a simple premise: not every human is like you. That’s OK. Acting with, or allowing, prejudice – consciously or not – robs you of your freedom to make your own mind up based on evidence, words, actions, and condemns the person you’re judging to that pre-judgement, regardless of fact. It’s so obviously detrimental, that you have to question the motives of those who propagate it.

People who preach hate often have something to gain from it. If we treat people with respect and love as a default, the benefits will be ours as well as theirs.

DGM: What was that lightbulb moment for you, the one that made you want to be a musician?

PV: I’ve always been completely submerged in music, but always assumed it would be a hobby, not a career. I was also passionate about art as a teenager, but when I didn’t get into the art school I wanted, I took a year to rethink. I suddenly realised my heart was in music all along. I enrolled on a Music Technology course soon after, and the rest is still becoming history!