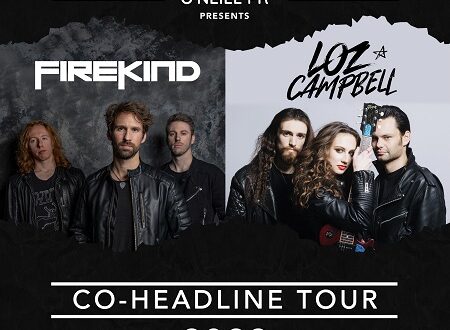 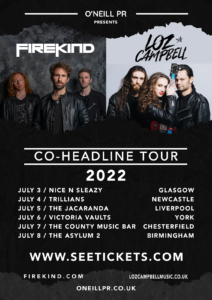 Firekind and Loz Campbell, two of the most exciting up-and-coming artists on the UK rock scene, are about to embark on their co-headline tour at 6 venues hot off the heels of making appearances at Wildfire Festival, Scotland.

Hailing from Devon, Firekind fuses epic soaring vocal and guitar melodies with driving, powerful drums and bass that could fill a stadium. Their debut album ‘What I Have Found Is Already Lost’ Deluxe Edition was a highly received self-release in 2020 which saw them invited to be special guests to Kris Barras Band at his annual Christmas show and Planet Rock Winter’s End to a fantastic reception. They are swiftly gaining a reputation as a formidable high-octane live act and will release new music this year. Award-winning frontman/guitarist Jas Morris states, “We’re right in the midst of recording our second album, you’ll get to hear new songs here first! Playing live is what it’s all about for us and we can’t wait!” 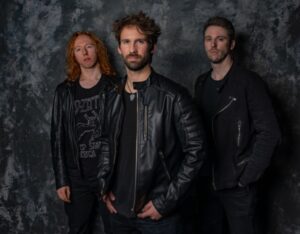 The Yorkshire-based fierce and incendiary Loz Campbell recently unleashed her hard-hitting new single ‘Bad Girl’ available now on all platforms. Encompassing spicy guitar riffs, sultry and alluring vocals, and a rhythm-heavy groove, the modern alternative cautionary tale will have heads nodding and swaying from the turn of the ignition. Delivering fiery live shows playing with such legends as Mungo Jerry and Zal Cleminson’s Sin Dogs, her band have graced iconic stages including London’s 100 Club and O2 Academy Islington and will play Planet Rock Rockstock in December. She enthuses, “I can’t wait to hit the road and prowl those stages once again. Be prepared for new songs, a bigger sounding band with an additional guitarist, and one hell of a rock show!” 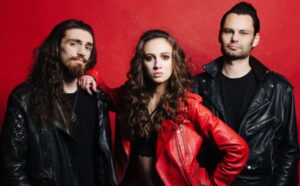