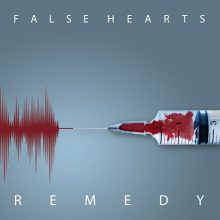 Expressing a sound that lifts from everyone from Halestorm, Black Stone Cherry, Muse, and Shinedown, to The Foo Fighters, FALSE HEARTS deliver raucous riffery, killer hooks and an engrossing live show. Born in Cambridgeshire in 2016, the modern rock quartet are comprised of vocalist/guitarist Emma Hodgson, lead guitarist Ali Westwood, drummer Adi Bowes and bassist Phil Benton. Since their formation, FALSE HEARTS have racked up an impressive list of accolades; the rising rockers have a movie credit for their single, Cynical Love, which appeared on the soundtrack of Strangers 2: Prey at Night. The single was pulled from the band’s 2018 EP, Dirty Little Soul, which reached the Top 30 on the iTunes Rock Chart. The EP also picked up extensive praise, widely increasing their fanbase. FALSE HEARTS have supported Hollowstar and Austin Gold, as well as playing alongside the likes of Those Damn Crows and Mason Hill, to name a few. The band have also played countless festivals throughout the whole of the UK.

FALSE HEARTS are now set to climb even further with the launch of their brand new EP, Remedy. The record brims with four cracking cuts, with each track displaying its own identity, groove and adhesion. Their future single and also the record’s namesake, Remedy, is one of the many highlights, and it soars with crunchy riffs, powerful structuring and anthemic refrains. The coming year will see the four-piece embark on a number of dates across the UK, including festivals such as Crazy Cowboy Festival 5, Cambridge Rock Festival and Hard Rock Hell XIV. 2020 is destined to be FALSE HEARTS’ breakthrough year.