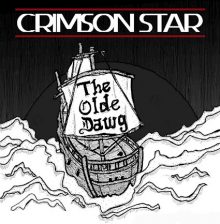 Drawing from a slew of influences ranging from Queens Of The Stone Age, Foo Fighters, and Black Sabbath, through to Muse, Crimson Star have amassed a sound that is loaded with robust riffery, driving energy and towering hooks. The band’s current single, The Olde Dawg, is out now, hit up the lyric video for the track above. The single is lifted from the trio’s hotly-tipped new EP, also entitled The Old Dawg, which arrives on Friday, 3rd April.

Hailing from Birmingham, the birthplace of Heavy Metal, Crimson Star have been building their following since their inception at the end of 2013. The hard rockers have garnered widespread praise for their live performances and, to date, have supported a host of prominent artists including Tax the Heat and Wilson. The riff slingers have also racked up acclaim for their sophomore EP, Bay View, which landed at the start on 2018 and was produced by Romesh Dodangoda (Lower Than Atlantis, Bring Me The Horizon, Funeral For A Friend). Just as the band were in the midst of support shows for Bay View, however, their original drummer left. Vocalist and Guitarist Jay D Shaw and Bassist Roj Ash immediately sought to find a replacement, but the search proved challenging, taking over a year to secure the services of king thumper, Chris Hopton. Up and running, the newly invigorated rock threesome wasted no time and hit the studio to record their third EP, The Olde Dawg, with Romesh Dodangoda again at the helm.