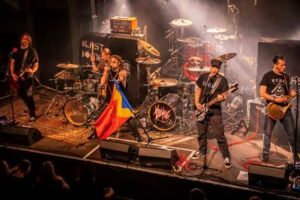 Hamburg. It starts with a Brit who moves from Birmingham, UK, to Hamburg for love. Johnny Rose (that’s his real name!) is by then singer of the 13 Shots and owner of the underground label Undead Artists. In Hamburg, the Hard Rock Café cook founds Blast Bomb and musically follows idols like Turbonegro.

After the band’s formation in 2017, things started early: tours through Germany and the UK, supports for Monolord, Powder For Pigeons and also the legendary Life Of Agony have chosen the band as local support on their tour with Doyle in 2019. In 2020, a show with Mondo Generator (Nick Oliveri) would have been scheduled. Blast Bomb’s Explosive Rock is a mix of slamming Turbonegro style Punk N Roll and heavy Hard Rock. Blast Bomb is a powder keg ready to explode and be unleashed on a rocking audience.

The first single “Rock N Roll Junkie” puts you in the mood for Life concerts and was released on all digital platforms on December 18, 2020. The accompanying video appeared on the popular German Youtube channel Hardcore World Wide. The second EP of the Hamburg rockers “Rock N Roll Junkies” will then be released on February 26, 2021. The record will be released on vinyl and was recorded by Timo Höcke, producer of Mantar, in “Die Wellenschmiede Studios”.

The next single “Go Away” will be released digitally on January 22.