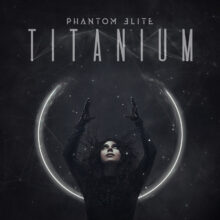 Exit Eden: ‘Rhapsodies In Black’ – one of the most fun collaborative albums of the last decade. A simple concept: four powerhouse female vocalists adding a metallic edge to an album of pop covers with the might of Napalm Records behind them. Such good fun, and an album able to elicit a smile from the most cynical of cynics. The four powerhouse vocalists in question featured Amanda Somerville of Avantasia, Kiske/Somerville, and Trillium fame, Clementine Delauney of Visions Of Atlantis, and two relative newcomers: Anna Brunner, and Marina La Torraca. The overwhelming memory of the album was one of discovery. Discovery of two new talents: Brunner, and La Torraca. And the latter will kick off a new year in barnstorming style with the imminent release of the sophomore album from her current band Phantom Elite.

‘Titanium’ follows up the well-received 2018 debut album ‘Wasteland’, and is the mark of a band growing in confidence. Alongside La Torraca are Max van Esch (guitars), and Joeri Warmerdam (drums), with keyboards from Koen Stam. Former After Forever guitarist and producer Sander Gommans is at the production helm (as well as songwriting duties), and although it’s very much a collaborative effort, it’s one that has a “band” feel to it.

The label on the tin might say Frontiers Music, but this is the heavier side to the well-respected label. Thanks to some fantastic playing, the listener can expect heaps of top-notch contemporary prog metal here and there (‘The Race’ and the expansive title-track especially), as well as lashings of symphonic metal (‘Diamonds And Dark’), all wrapped up with incredible vocals from one of the rising stars in metal. It’s impossible to talk about Phantom Elite without waxing lyrical about Marina La Torraca. A spellbinding range which at times can be both massive and bombastic, as well as light and tender: her high-notes throughout ‘Diamonds And Dark’, followed by the lighter-than-light vocals of ‘Worst Part Of Me’ are genuinely thrilling. The latter is a real highlight, and not just for the magnificent harsh growls from guest vocalist Stef Rikken. Growls on a Frontiers release? Love it. Make no mistakes, alongside Anna Brunner, Cammie Gilbert, and Melissa Bonny, Marina La Torraca is a real talent to keep an eye on.

It should be noted that although a great deal of the focus on Phantom Elite will undoubtedly be on La Torraca, the players alongside her are no slouches. Joeri Warmerdam plays with a great deal of precision and knows when to play it cool and show some restraint: ‘Glass Crown’ for instance, hints that it might go down one particular route, only for Warmerdam to slow it down and take the band down a lighter path, before releasing the throttle in different places throught what is ultimately a fantastic uptempo song that successfully melds pop with metal. Max van Esch is everywhere. Fretwork fireworks by the bucket-load, and with most of the tracks running over four minutes in length, he has plenty of time to stretch out and flex his muscles. Something that he does with ease.

The centrepiece of the album is the seven-minutes plus of the epic title-track. Beginning with a full-on assault led by thundering drums, and galloping guitars, this is modern, progressive metal at its best. A middle-Eastern vibe to the arrangements helps with the sheer scale of the track, as do the noodles and rather lovely light guitar solo from Max van Esch mid-song. Progressive music can sometimes be a tad self-indulgent but van Esch never crosses the line. The little pause on the five-minute mark after his solo, serves as the brief calm before the storm, before the band crash back in to scare the bejesus out of anyone listening way too loud on a pair of cans. The light ethereal vocal intro of ‘Bravado’ quickly follows on, and soon gives way to a slight Amaranthe electronica vibe on a track that gets better with each listen. Twelve combined minutes that showcase the depth in playing and songcraft from Phantom Elite. La Torraca’s vocals on the latter are the aural equivalent of having Matthew McConaughey whisper “Alright. Alright. Alright” in your ear. So soothing.

The closing stages of the album sees a guest appearance from La Torraca’s Exit Eden bandmate Amanda Somerville on a sweeping, majestical track that comes complete with another killer guitar display from Max van Esch. The quality refuses to dip as the album nears its conclusion: ‘Deliverance’ should impress any self-respecting fans of symphonic metal just as it should fans of modern progressive metal, and the guitar work on ‘Eyes Wide Open’ is simply magical, as is the wall of vocals in the last few moments.

With Frontiers Music recently branching out to encompass bands with more of a heavier sound, they have brought some incredible new bands to light: Phantom Elite being just one of these bands. An album full of melody, differing variants, and riffs a-plenty. A fantastic way to kick-off 2021, and another new band to drool over. Those drums….. 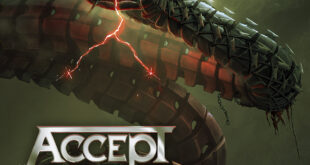