Another week, another fresh batch of new singles that have been catching our attention over the last week or so. From murder-folk armed with a bingo dabber to the beardos in Crobot announcing their return with some bad-ass grooves, from a short, sharp shock via Spain to fantasy/classic hard rock from the Nordic Union and America, from one of the most familiar surnames in music to a young British band who are on the cusp of breaking out with their highly-anticipated debut album. Quite a variety, click on the artists name in bold and it will take you to the relevant YouTube video or social media page. Enjoy. 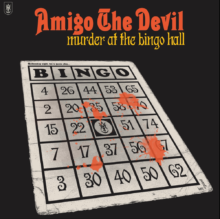 Only Amigo The Devil could write a song about bingo and make it sound murderous. But while the song title ‘Murder At The Bingo Hall’ might suggest an actual murder (old folks, say that in Taggart’s voice, it works way better) the protagonist is only figuratively speaking as his murder weapon is in fact a bingo dabber, and he’s “killing” his opponents at bingo – “It was a quiet night down at the gaming hall. Doubled up on cocaine and Adderall. The room full of smoke and the air so still that I choked when I raised up both of my hands to yell… BINGO”. Amigo The Devil is the master of the macabre, he’s not going to be singing about the happier things in life, and when he does take a subject matter as inoffensive and stale as bingo, you can bet two fat ladies that he is going to put his own twist on it. Quite an eclectic track, with a lot more going on rather than just ATD (aka Danny Kiranos) and his guitar; the kooky electronic pulsing sound throughout, deep, deep Hammond organ, crazy sound effects, and the best weapon of all – Amigo’s rich voice, which is as full of life as ever. For some reason though, it’s nigh-on impossible to listen to the track without breaking into a few bars of the 1980 Ottawan cheese-fest ‘D. I. S. C. O.’: cheers, mate.

Spanish two-piece powerhouse BALA (all caps for a reason) have been cooking up a heady brew of grungey, punkish stoner-rock in anticipation of the forthcoming new album ‘Maleza’ (due May 14th) and new single ‘X’ smashes down the door with an almighty mash-up of Kyuss and L7. Comprising of Anxela Baltar (vocals, guitars) and Violeta Mosquera (vocals, drums), BALA don’t hang around. They get in, slap the listener around the chops, then get back out again pronto. ‘X’ is a head-swirling slab of music that delivers on so many fronts. Fuzzy, warm riffs played out over a wall of noise courtesy of Violeta Mosquera’s drum work. It’s powerful, melodic, and thanks to the dreamy backing vocal harmonies, kind of trippy; all played out at a furious pace though. 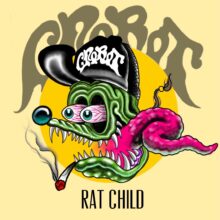 Beardos of the Crobot nebula, time to rejoice, for the masters of bad-ass grooves, hellacious riffs, glorious facial hair, and stage moves that Mick Jagger would shy away from, are back. Nothing quite gets the juices flowing as a pop-up notification regarding a new Crobot tune; especially when it is accompanied by a short, retina-blitzing video teaser featuring the incredible, spaced-out artwork of Crobot guitarist Chris Bishop. Did we mention that the track/video also features the four-string lunatic Frank Bello of Anthrax helping out on a track he co-wrote? Now we have. The new track in question, ‘Mountain’, is a muscle-flexing, chest-beating, slice of wonder, and features all the Crobot goodness that makes them so special. The only burning question is; why the hell are these guys not household names? Expect new EP ‘Rat Child’ in June.

The grandiose nature of fantasy metal can sometimes alienate it from fans of more traditional metal, but if metal as a genre offers up a sense of escapism, then what’s the harm in really going for it and ramping up the fantasy factor? On his forthcoming full-length album (and all-star Metal Opera project), ‘Legend of Valley Doom Part 3’, Norway’s Marius Danielsen doesn’t hold back. New single ‘The Sarlinian Bow’ is but a fleeting glimpse at the vast project (due May 7th, 2021), and with John Rhys-Davies (The Hobbit, Indiana Jones) onboard as a vocalist you know it’s going to be full-on, so check your inhibitions at the door and dive in. Running 8:33 minutes long, and even though it has a narrative concerning the album, running throughout, it’s one of those tracks where the listener can still enjoy it as a standalone track. Stirring vocals, galloping drums, guitar solos abound, narration, choirs, orchestration; it has everything that you would imagine from a fantasy metal epic. With a cast featuring, amongst many others; Jennifer Batten (Michael Jackson, Jeff Beck), Olaf Hayer (Luca Turilli), Melissa Bonny (Rage of Light, Ad Infinitum), and Anniken Rasmussen Danielsen (Darkest Sins, Legend of Valley Doom), it’s a fantastic romp which sets the album up nicely. 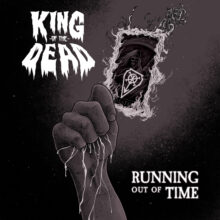 UK-based horror rockers King of the Dead return with new single ‘Running Out Of Time’, the fourth in a five-part anthology of visually-driven stories. With a very brief few seconds of an intro, before the vocals kick in, it’s quite an instant track. Vocalist Shah has an interesting voice; haunting and full of life, the vocals work really well in ensnaring the listener from the off, especially the chorus, and the vocalizing during the breakdown mid-song. Fuelled by a Ghost-like vibe in places, ‘Running Out Of Time’ is the very definition of a slow-burning track, and the neat guitar work (also courtesy of Shah) is quite understated and helps build a strong, brooding atmosphere. KOTD are an interesting proposition; trying to mix things up by adding a little more bang for your buck – curious to check out part five now.

The legacy created by acts such as the Deep Purple family tree and Uriah Heep shows no signs of lessening in the modern era, and each new week seems to bring music created in 2021 with one eye on the past work of Blackmore, Dio, Gillan, Box, Byron, etc. Swedish vocalist Christian Liljegren (Narnia & The Waymaker) has created a new album, ‘Melodic Passion’, that pays tribute to his musical heroes listed above. ‘Salute For The King’ is the new single and packs in plenty of musical homages to the classic British rock bands of the ‘70s. The vocals from Liljegren are cut from the same cloth as Heep’s David Byron, and the much-missed Ronnie James Dio, plenty of Blackmore-esque guitar work, including one killer, lengthy solo, which even without watching the video, you just know that it’s a Fender Strat playing. The bluesy shuffle-like pacing is straight out of the Deep Purple playbook and if you are a fan of all things Purple-related then it’s hard to find fault with ‘Salute For The King’. 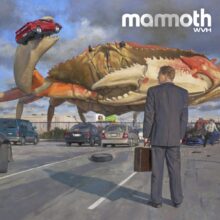 If ever anyone wanting an example of how much of a cesspool Twitter can be, then they just need to follow Wolfgang Van Halen and observe the vitriolic abuse that he seems to be subjected to on a frightening basis. Why he is the target of so many trolls is baffling, is he supposed to drop his surname? But with each new track released from his upcoming debut album as Mammoth WVH, Wolf is taking on the doubters one at a time by delivering some top-quality, well-written, and extremely well-played, modern hard rock. He has a strong voice and is doing his own thing. Latest offering comes in the guise of two new tracks; lead single ‘Don’t Back Down’ which comes with a great video that shows Wolf’s sense of humor (we like drummer Wolf the best, btw), and ‘Think It Over’. The former is an uplifting, anthemic hard rock track in a Foo Fighters vein that is so infectious that it should have the feet tapping in appreciation. The latter is a light and airy example of pop-rock that highlights the diversity on the upcoming self-titled debut album. With Mammoth, Wolf has the opportunity to reach a whole new generation, and in doing so, he is ultimately keeping the Van Halen legacy alive. He also plays all the instruments himself, and sings, and wrote the songs. Some men can multi-task after all it would seem.

Continuing with the Rainbow/Whitesnake theme featured earlier with Christian Liljegren, Social Disorder is a new project led by Swedish musician Anders LA Rönnblom that leans heavily on the classic ‘70s hard rock era. Featuring an all-star cast that includes Tracii Guns, Rudy Sarzo, Jeff Duncan, Dave Stone, Snowy Shaw, and Shawn Duncan, amongst others, the forthcoming album ‘Love 2 Be Hated’ sounds like an interesting proposition. Debut single ‘Windy Road’ is a hard rock ballad-of-sorts full of David Coverdale-isms from vocalist Thomas Nordin, and the relative newcomer acquits himself well considering that he is surrounded by a lot of players who have been-there-done-it. It’s fantastic hearing Tracii Guns front and centre again, and his guitar playing remains, as ever, emotive and thrilling. Plus, how great is it seeing Rainbow ‘Long Live Rock & Roll’-era Dave Stone behind the keyboards again? Great to have you back sir. ‘Love 2 Be Hated’ has just been added to the “albums to watch out for” list. 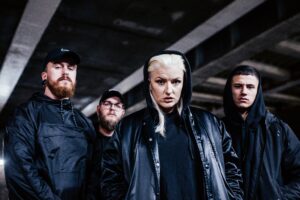 Following on from ‘Hideous’, the first single to be lifted from their highly-anticipated debut album ‘Culling Culture’, UK alt-metal act Vexed prove with new single ‘Epiphany’ that ‘Hideous’ was no fluke. One of those songs that doesn’t waste any time in creating a connection with the listener, and pull them in from the opening salvo. Musically, it’s progressive in places (Periphery), and more extreme in others (Meshuggah). Great technical playing by Willem Mason-Geraghty (drums), Jay Bacon (guitar), and Al Harper (bass), and with a mix of bruising harsh vocals and super-clean vocals, Megan Targett is a revelation; one of those artists that you know will be on the cover of Metal Hammer very soon, under the heading of “The New Generation”, or words to that effect. The song carries an important message about battling mental illness, and discovering “…how to not give a fuck about what anyone thinks of you.”. Napalm Records have played a blinder in signing Vexed, genuinely a band that should take off in some style.