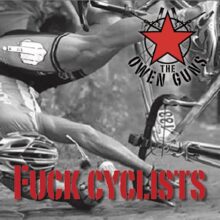 Australian Hardcore Punk act THE OWEN GUNS have released their first single & video ‘F**k Cyclists’ for Riot Records (Part of the Golden Robot Global Entertainment Group). ‘F**k Cyclists’ is a short blast of punk rock born out of the frustration of frequently being stuck behind cyclists on narrow country roads. Straight to the point, it pulls no punches.

THE OWEN GUNS would like to point out that they don’t condone acts of violence towards those Lycra clad irritants, no matter how tempting.

ABOUT THE OWEN GUNS

THE OWEN GUNS are a Hardcore Punk band based in NSW with members split between Sydney and the South Coast. Although they’re a reasonably new band, THE OWEN GUNS is made up of veterans of the live music scene – the members have paid their dues playing not only in Australian bands but also in the case of the vocalist and drummer in Canada and China respectively.

Unlike most of the current crop of punk bands, there no fake American accents or fear of offending people here. They don’t take themselves (or anyone else) too seriously and aren’t afraid to call it how they see it.   THE OWEN GUNS are heading to the studio soon to record an EP of hardcore punk tunes that will bring the riffs and the laughs. Keep an ear out.