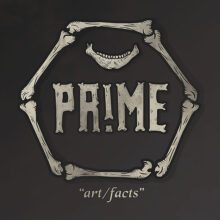 UK band Prime have just released their ‘Best of’ compilation – ‘Art/Facts 2014-2018’, founding member Lee Heir talks us through the background on the band, and discusses his plans for the future.

Prime (UK Band) started as a studio project in 2014 and then we began playing live properly early 2015 once we had a settled lineup. I am now the only founder member, and run the band alongside my excellent guitarist and co-singer Chris D Bramley who also has his own solo EP entitled One of the Boys on my label PHB. We performed the track on Notts TV live on March 7th, then played that night in front of 700 people at the Winding Wheel at a messy gig riddled with technical issues, then after that we were done playing live for good and Prime (UK Band) was no more.

My first performance ever was thrashing around playing four tracks in my early 20’s at a local open mic at a place in Nottingham called The Running Horse – hello Rob! – it was messy garage rock and the fastest 16-17 minutes of my life! A buzz once we were applauded and came off stage.

‘Maximum Rock N Roll’ was on our t-shirts – before Primal Scream stole it (laughs)! We’re rock, punk, blues and funk all mixed together with solos and big vocal sounds.

Hundred percent commitment to playing, promotion and recording is the only way to do it. Otherwise why waste everyone’s time? There have been times where mostly others in Prime – but sometimes myself – haven’t had that, which is why we played the last Prime (UK Band) gig in March as I want to work with more committed people and start afresh. 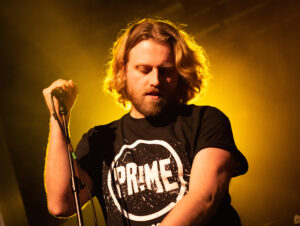 We’re working on finishing the very last Prime recordings at the moment, Corona has got in the way of us adding the final lead and backing vocals, otherwise they are finished bar mixing and mastering. And obviously I’m promoting our ‘best of’ compilation, ‘Art/Facts 2014-2018’ also… So check out the links and videos below!

The 1975 would be interesting, or Arctic Monkeys. I’m not a huge fan of either but we want to play with the biggest bands and show them up.

I really have no idea. There’s some quality bands from Nottingham like Soft Boys and Girls Club that deserve recognition.

Listening to a Queen album in the bath as a kid, and dropping the sleeve in the water. ‘The Miracle’… Quality album… ‘Invisible Man’ and all that. I don’t think there was a lightbulb moment per-se, I just got that into rock n’ roll music like The Doors and The Stones that I became obsessed with the idea of creating my own music. Someone said to me once that the reason we create is that we’re searching for that mixture of music that isn’t quite out there, and I quite like that idea.

I saw Arcade Fire on their last tour, they were fucking great live.

East 17’s Greatest Hits gets me the most ridicule, but I quite like their catchy tunes and I think their message was quite positive – not the one about getting stoned, eating baked potatoes and running over yourself with your car though … not that bit! They actually played my school in the early 90s so I’d love to hop in a time machine and see that!

Just to have a break and work on my writing … I’ve just finished my screenplay. Then I’d love to work on some soundtrack style music now that Prime is finished.

I’m still trying to fathom out what Twitter is actually for but you can find us on there under @primeukband – same for Instagram – and on Facebook under @ukprime. These pages are going to be used more for posts about the music scene and upcoming talent in the future, we want to keep elevating new music the best we can now that we’re finishing up.