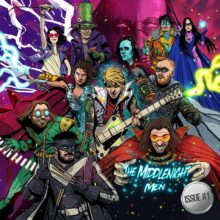 After releasing a string of high-quality singles, along with retina-blitzing promo videos set to stun, The Middlenight Men have made good on the early promise shown and delivered the all-important money shot in the shape of their infectious, feel-good debut album ‘Issue 1’.

Who are The Middlenight Men? The brainchild of vastly experienced UK singer/guitarist Nick Hughes that’s who. Made up of fellow musicians whose path Hughes has crossed over the years, including current Status Quo drummer Leon Cave, The Middlenight Men are all about fun and escapism. If further proof of this is required, then their promo videos would be a great place to start, especially the alternative-superhero mini-movie (complete with an intro from Steel Panther’s Satchel, as well as mid-credit outtakes) for ‘Heroine Heights’. Such great fun mashing up superheroes from both the Marvel and DC universes, and giving them a rougher edge to make them more, well, normal for one. A lovely homage from Hughes to the comic-book world that obviously has played such a major part in his life, look at that album cover artwork – stunning, isn’t it? 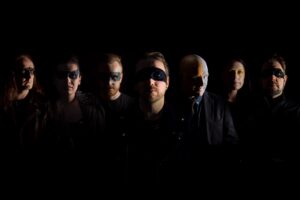 Musically, The Middlenight Men go straight for the feet, with the intention of getting them happy feet moving in what is commonly known as dancing. Or it was known as dancing when you could still go to a gig, have a drink, and make a tit of yourself in front of complete strangers. It’s melodic power-pop packed with instant earworms moments, which if you are a fan of Ginger Wildheart’s much-loved Hey! Hello! then you will seriously dig these guys. The same love of melody that Ginger stamps on anything with his name attached, along with some razor-sharp riffage and lashings of the bounce-ability factor. ‘They’ll Be The Ones’ is a six-minute monster that could be an outtake from a recent Wildhearts session, especially the lengthy instrumental jam which kicks in mid-song and mixes so many different styles together into a pit-inducing moment. So many highlights on this album; the Manics-fuelled intro to a total banger of an opening track – ‘Rat Star’ (more Manics influences on ‘Budapest Brawler’), the Terrorvision ‘Oblivion’ bounce on Hughes’s tale of getting fucked up in Argentina – ‘B.A. Baby’, the punk-ish pace on ‘You (Getting Over)’ which as bizarre as it might sound, has a feel of the Beach Boys on Whizz. The industrial-tinged drum sound on the intro to ‘They’ll Be The Ones’ which gives way to a killer track very much in a Wildhearts vein. Even the hands-in-the-air Robbie Williams-ish ‘Sleep’ works. Expertly placed at the end of the standard version of the album, it’s a great example of how important pacing is on an album, and how putting some thought into the running order ultimately pays off.

The mid-section of the album totally slays; first with ‘Heroine Heights’ (the Sex Pistols-meets-Batman Theme tune intro is wicked) where the guitar work throughout is top-notch; then ‘Prison of Love’ which begins with a modern-glam drum sound and vocal effects that recall Rob Zombie, before the song takes a turn away from the heavier feel hinted at, and goes for a sleazier vibe, the sweet drum sound hangs around and fair rattles the fillings loose when played at volume. ‘ExtroIntro’ keeps up the quality where an album might traditionally dip, a Foo Fighters-like feel throughout on one of the more low-key tracks, one of those tracks that American radio could lap up, as well as being the perfect moment to catch a breath during a gig. ‘We All Need Help Tomorrow’ brings the mid-section to a conclusion with three perfect minutes of Volbeat meeting The Knack for a shot or two over at Dave Grohl’s gaff. 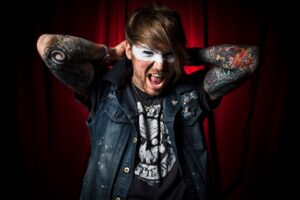 During a recent interview, Nick told us that one of his earliest musical memories was his dad taking him to see Meat Loaf in concert, and now that he is a musician himself, he wants to make people feel the way that he did watching Meat Loaf belt out ‘Paradise By The Dashboard Light’. On bonus track ‘The Story Of The Three’ Nick pays homage to the same classic Meat Loaf track as well as throwing in a tip of the hat to the Meat Loaf/Cher roadhouse rocker ‘Dead Ringer For Love’, the end result is a riotous three minutes which is performed at a thrilling pace.

The quality of everything here is staggering; the production, the songcraft, the playing, the vibe, the gonzo outro on bonus track ‘Everybody’s Been Broken Hearted’, and that incredible cover artwork: all of the highest quality. A feat made more impressive considering that this is all done without any major label support.

If streaming is your bag, then stream here, but remember, streaming pays monkeys. Buy ‘Issue 1’ directly from the band here.