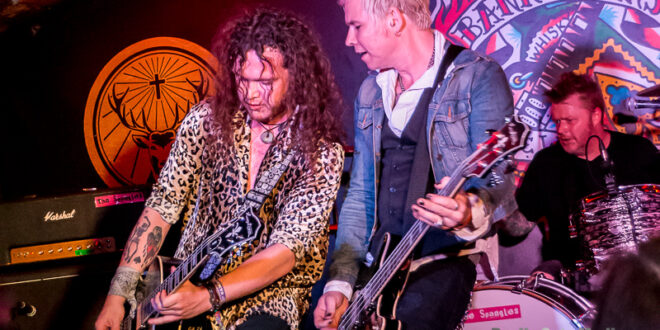 Cunningly released to streaming sites on Valentine’s Day, noise merchants The Spangles have come up trumps with ‘Boys Just Wanna Have Fun’, a lip-smacking, leg-humping, four-track EP made up of covers from four different female artists from the 80s. Cheaper than a bunch of forecourt flowers (and longer-lasting), it’s 14 minutes of full-throttle, good-time music, guaranteed to put a smile on the face of cynics everywhere.

For the uninitiated, The Spangles are made up of Ben Marsden (vocals/guitar), Polly Phluid (vocals/bass), and Ginna Rhodes (vocals/drums). You might recognise them from The Main Grains and The Idol Dead, or you might recognise the baby-faced assassin, Ben Marsden, from his guitar duties alongside Warner E. Hodges. Put these three amigos together and you have The Spangles; masters of mayhem, purveyors of garage punk ‘n’ roll, and probably one of the best bands you can catch when you are in need of a right good cheering up. And that’s exactly what ‘Boys Just Wanna Have Fun’ offers the listener, a welcome and brief diversion from whatever ails them.

So, four rocket-fuelled cover versions to blow away the cobwebs, or to keep you company if you are in the doghouse for forgetting what day it is. Four tracks, £4 on Bandcamp, bargain. First up a romp through Joan Jett’s ‘Bad Reputation’ where the gang-vocals – that you would expect from a band with three vocalists – are bovver-booted in size, and Marsden’s power riffs and chords blow the roof off thanks to the usual exemplary production from Dave Draper. The rather wonderful Kim Wilde is in the house courtesy of a mindblowing version of her other hit ‘Chequered Love’. The vocals are huge, but it’s Polly’s big-ass bass licks that rattle around for some time afterward. It’s Ginna, however, that steals the show on a killer rendition of The Bangles mega-hit ‘Walk Like An Egyptian’. His nailed-on playing controlling the pace, and along with those same big-ass bass licks from Polly, turns the track into a riotous few minutes that at times sounds like Motorhead playing the Banana Splits theme tune. A hell of a thought, but now that you’ve read it, you won’t be able to get it out of your head. Bringing the EP to an all-too-brief conclusion is a totally gonzo version of Transvision Vamp’s ‘I Want Your Love’, where the backing vocal harmonies are glorious and as larger-than-life as Wendy James herself.

Connect with The Spangles here.