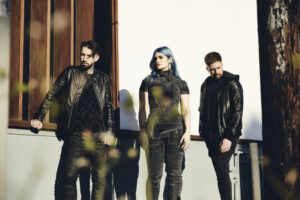 Spiritbox, one of this year’s hottest and fastest rising bands, have today announced the release of “Constance (Acoustic)”, a stunningly haunting, acoustic version, of their 2020 hit “Constance”. The reimagined version of the song was recorded in a church with accompaniment from a string trio earlier this year in conjunction with The Grammy Museum COLLECTION:live #spotlightsaturdays in partnership with BMG. Watch the full performance here.

“Constance (Acoustic)” is available on all streaming platforms now here. The accompanying visualiser can be found above.

Speaking on the process of reimagining the track for an acoustic session, Spiritbox guitarist, Mike Stringer shares, “This live version of Constance was a very ambitious project for us. Before we left to start recording Eternal Blue, I had a rough demo of an acoustic version of Constance written. While we were tracking the album, the Grammy Museum asked us if we’d want to contribute to their “Collection:Live” series with a live acoustic/stringed composition of the song. Of course this was a huge honour for us and something we couldn’t turn down, but it posed a challenge as we were recording in the middle of the desert, and I had never written a string composition before. After learning how to turn midi into notation, and some back and forth with our producer Dan Braunstein, and violinist Haruka Horii, we had a version we were confident in. This was the first time we had ever performed this song live, and the addition of the strings by Haruka Horii, Bonnie Brooksbank, and Mark Bassett really brought this whole thing to life. Putting this together was a great experience, and I hope to explore more acoustic compositions in the future with Spiritbox.” 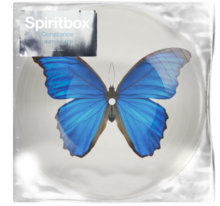 Spiritbox have also announced the release of a very special, limited edition 7″ butterfly picture disc of their powerfully emotive hit track “Constance”. The picture disc, which features a blue butterfly in ode to the jumper Courtney wore in the original “Constance” music video is available now and can be purchased here.

Spiritbox thrilled fans back in May with the official announcement of their highly anticipated debut album, ‘Eternal Blue’, which is set for release on Friday, September 17th, 2021 with pre-orders available now here. The band sold out of all vinyl variant pre-orders within the first 24 hours of announcement and on-sale.
The band have released two new songs from their debut album this year. First single “Circle With Me” which smashed the Billboard charts including the #1 Hard Rock Digital Song Sales spot and has clocked up 9.5 million streams to date. More recently, they released “Secret Garden” which has already racked up 4.7 million streams since its release.
Prior to “Circle With Me” the band released two break-out, hit singles last year – the heartbreaking and otherworldly original version of “Constance” and the unrelentingly brutal “Holy Roller” which charted as the #1 song of 2020 on SiriusXM’s Liquid Metal.

Named after a device some believe is capable of communicating with the dead, there’s a sense of the paranormal running through all that Spiritbox do, but this is a group of artists who are very much brimming with life and creating something remarkable with their music.

Characterised by fierce intensity, unwavering emotion, and technical splendour, their debut full length album ‘Eternal Blue’ is destined to latch onto the hearts and minds of those who hear it. It is that connection between fan and artist that drives Courtney, Mike, and Bill in all that they do as the Spiritbox phenomenon continues to grow bigger and bigger. The album also features a special guest appearance from Architects frontman, Sam Carter, on the track ‘Yellowjacket’.

Having toured the world many times over with their previous bands – metal outfit iwrestledabearonce (Courtney and Mike) and pop punk band Living With Lions (Bill) – Spiritbox absorbed the highs and lows of living as working musicians and decided to try a different and more sustainable approach when it came to releasing their music. In doing so they quickly garnered a cult-like online following which has led to over 75 million streams across all platforms and sell outs on every physical release and most merch items they’ve released to date. Towards the end of 2020 they announced that they had signed with world renowned label, Rise Records in partnership with Pale Chord.

The band are scheduled to perform at a number of major festivals across Europe and the US this year, including:

Spiritbox will also hit the road across the USA next month with Limp Bizkit for The Limited Last Minute Post Pandemic Popup Party Edition Tour.