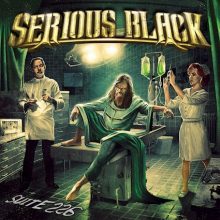 The band released their new single & video for ‘When The Stars Are Right’, the first track to be taken from upcoming album ‘Suite 226’. Check out the official music video above.

After 18 months, Serious Black – Official are back with a bang with their killer new album ‘Suite 226’. They used their well-deserved time-out to design new concepts, to work on fresh material and also to build their own studio. Bassist Mario proudly announces: “The waiting comes to an end, we are fresh and rested. Above all, we are hungry to return to the stage.”

After guitarist Roland Grapow and bassist Mario Lochert hatched the idea of founding a Melodic Metal band in 2013, it was only a matter of time before these thoroughbred musicians, who earned their stripes in bands like FIREWIND, RHAPSODY, TAD MOROSE, EDENBRIDGE, VISION OF ATLANTIS and DREAMSCAPE, established the band in the Melodic Metal scene. In 2015 SERIOUS BLACK released their debut album ‘As Daylight Breaks’, gaining a chart entry, and completing their first headliner tour one year later. The fan base was growing steadily, followed by three successful albums, including live recordings and the unplugged version ‘First Light’ in 2017.

In 2020, the German-American band proudly present their highly anticipated fourth studio album ‘Suite 226’ that’s guaranteed to stir the Power Metal community’s blood. Unlike ‘Mirrorworld’ and ‘Magic’, which are more in a hard rock style, ‘Suite 226 features more driving guitars, catchy hooks and finest riffing as showcased in ‘As Daylight Breaks’.

After concept album ‘Magic’, ‘Suite 226’ tells a complete narrative of a mentally confused man who is torn between his own dreamworld, reality and evil. The protagonist has been held captive for many years in the dismal, cold padded cell number 226, the inhuman condition of the rotten psychiatrydriving him insane. In his imagination he is the mighty king who lives in his feudal castle surrounded by courtesans, good food and wine and commands an invincible army. Staggering between illusion and reality, he continues to be drawn into the maelstrom of madness, his life becomes a ride through purgatory accompanied by demons, anxiety attacks and paranoia.

SERIOUS BLACK’s ‘Suite 226’ is the perfect soundtrack for this trip to the place of damnation. Ruthless riffs meets catchy melodies, driven by a manic rhythm section, Urban Breed’s unleashed vocals add the necessary amount of insanity