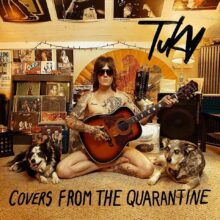 Upon scoring an opening slot on the Mötley Crüe/Def Leppard American stadium tour, ex-Biters frontman Tuk Smith must surely have done a little celebratory jig. No need to point out what happened next, but the good news is that Smith and his band The Restless Hearts are still scheduled to open the tour when it happens in 2021. With 14 of the dates already sold out, this is a hot ticket regardless of what you think about Crüe “reforming”, c’mon though, even Blind Pew saw that one coming. In the meantime, Smith strapped on an acoustic guitar for this aptly named EP: ‘Covers From The Quarantine’.

Five tracks, five covers, thankfully none of which are ‘Wonderwall’ or ‘Imagine’. Fucking Hollywood A-listers ruining ‘Imagine’, what were they thinking? Armed with only an acoustic guitar, keys, and some drum samples, Smith has tackled INXS, Kiss, Lana Del Rey, The Who and rather bravely: David Bowie.

There is something about covering David Bowie that raises alarm bells, especially when it’s such an iconic Bowie track like ‘Life On Mars’. One of the most evocative tracks ever, a genuine piece of art that can transport the listener back to the time and place where they first fell in love with it. And Tuk Smith totally knocks it out of the park. His voice is authentic enough to retain the glam, timely feel of the original, just the right amount of rasp, but with heaps of heart. No doubt this would have been the one causing Smith sleepless nights, but he does a remarkable job and even the most ardent Bowie fan shouldn’t skip this one by.

INXS are represented by a spirited rendition of an early classic; ‘Don’t Change’. The simple guitar tone works really well, as do the subtle background arrangements, and the ethereal “backing vocals” towards the end. ‘Hard Luck Woman’ from Kiss has always been a track that lent itself to the acoustic format, as the ‘Maggie May’-like pacing is perfect for strumming an acoustic. Smith gives it a fresh coat of paint for 2020 while still retaining the spirit of the original. Lana Del Rey’s ‘Summertime Sadness’ gets a slightly slower tempo, and still manages to be even darker and moodier than the original. Smith has a real knack for thinking outside of the box and this is perfect for him.

Ending on an eerie rendition of The Who’s ‘Behind Blue Eyes’ (complete with lush choral backing vocals) that finally lays the nightmare of the Limp Bizkit cover to sleep, ‘Covers From The Quarantine’ is twenty minutes well spent. Biters were the band that got away, a band that should’ve been way more bigger than they were, and it’s great having Tuk Smith back making music.