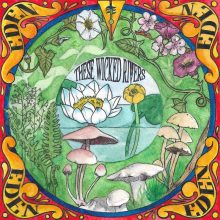 Fantasy gig time; Clutch headlining, Crobot as tour special guests, and These Wicked Rivers as local support. Mind you, any gig right now that doesn’t involve Zoom or livestreaming could be classed as fantasy. But if and when live in-person gigs do become a thing again, this would be a doozy. Clutch are famed for taking out smaller unestablished bands so anything is possible, but for now, it will remain firmly in the realms of fantasy.

Derby beardo’s (keeping that Crobot connection alive) These Wicked Rivers play a bluesy-tinged brand of rock, but it’s the bodacious grooves on offer that help make them stand out. Clutch and Crobot can both rock out with the best of them, but it’s when they start grooving that things get a little interesting. And this same idea comes shining through on ‘Eden’. Opening track ‘Tea Leaves’ is a short, backwater ditty that crashes straight into the earth-shaking grooves of ‘Shine On’. Think Clutch with Jaren Johnston from The Cadillac Three guesting on fuzzy guitars, and Jack Bruce from Cream cheering TWR bassist Sam Williams on from the wings. Not one but two incredible jams feature in the four minutes that ‘Shine On’ runs for, and it’s easy to imagine punters losing their minds over this one. Lead guitarist Arran Day peels off one killer solo after another, and at times his muscular playing causes a Zakk Wylde flashback. The opening six minutes of ‘Eden’ are ripe for the “repeat” button being misused on a regular basis. 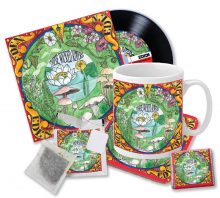 Following on from the opening six minutes are another fifty or so of high quality guitar-driven rock. ‘Eden’ is truly a wet dream for fans of music where the guitars are pushed front and centre; check out the dual guitar attack of ‘Count To Ten’ and purr with delight. Loads of variety on the album to marvel at; the Celtic influenced intro of ‘Hit The Ground’, the Hendrix-sized licks on ‘Floyd’, the soft jazz-like drum intro on ‘Money’ (a track that quickly explodes to life with an almighty swinging groove), the sublime, gentle tones of ‘This Train’, the Doors-like atmosphere that surrounds stages of ‘Ceasefire’, the towering closing track ‘World In Chains’. One of the most pleasing aspects about ‘Eden’ is the fact that These Wicked Rivers are not afraid to think out of the box. With the exception of ‘Tea Leaves’, only one of the featured tracks fails to hit the four minute mark. The others are lengthy journeys and showcase a band spreading their wings. ‘Eden’ will take an hour out of your life, but slip on some cans and crank this sucker up for it’s an hour well spent.

So after several years and a handful of singles and EP’s,These Wicked Rivers have produced the money shot that fans have been waiting on; a full length debut album. The urge to rush a debut album out a few years back must have been a hard one to resist. But These Wicked Rivers made the wise decision to hone their craft and keep the songs brewing (gratuitous tea reference purely for those with a TWR ‘Stay At Home’ bundle – see pic above) until they were just right. After all, you only release your debut album once. Thankfully ‘Eden’ is not the equivalent of someone putting the hot water in first and then adding the teabag (seriously, who does that?). It has been well worth the wait. Now, stick the kettle on.

These Wicked Rivers are:

‘Eden’ is available now, pick it up here.