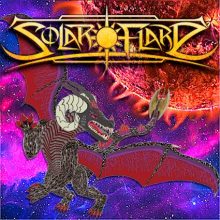 The state of Ohio often refers to itself as the “birthplace of aviation” (well it is the birthplace of the Wright Brothers after all), the state also houses the Rock and Roll Hall of Fame (“Hello Cleveland!”), and the city of Cincinnati has been called the “Chili Capital of America”. A healthy breeding ground for power metal? It would seem not, but Solar Flare are hoping to change that with their self-titled debut album.

Mixing ‘80’s inspired NWOBHM with the early origins of power metal, Solar Flare wear their influences proudly on their cut-off war jackets. Power metal without the Manowar (or Euro) cheese factor. This is power metal without the swords and sorcery imagery, although the cover art is very striking. Sure, the opening track is called ‘Medieval’ and features a Rainbow ‘Rising’ keyboard sound, but there’s more of an Iron Maiden/Judas Priest feel to the music. ‘Phantom Of The Opera’-like galloping, melodic guitars, with Rob Halford-esque screams.

Vocalist Ethan Jackson has an interesting range, and when he sings in a lower register (especially on ‘Under The Sun’ and ‘Taken to the Other Side’), he keeps the Rainbow connection alive by sparking memories of Graham Bonnet. When he goes for the extended high notes, or when he mixes both styles on ‘Pharaoh’, then the Halford/Geoff Tate influence is clear for all to soak up.

The material on offer is propelled forward by the precision drumming from Jordan Cavalaris, who along with bassist Cody Bowling makes quite a powerful backbone. With a larger production budget, the drum sound would be towering (the intro to ‘A World In My Head’ is especially memorable), but for now the raw approach works well. A strong twin guitar attack was crucial to NWOBHM acts, and here both Mark Greene and Garian Perry certainly make their presence felt. Oodles of razor sharp solos, crunching riffs, and the all-important interchanging Dave Murray/Janick Gers/Adrian Smith melodies. With Solar Flare, the guitar is king.

‘Solar Flare’ is a solid debut, yes it is raw and un-polished, but that is the very essence of the 7 track release. The NWOBHM greats started out with DIY releases where the charm lay in the punk-style rawness. Fast forward a few decades and Solar Flare are keeping that spirit alive.