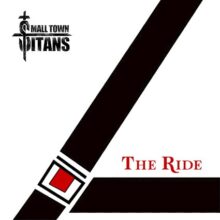 No faffing around. No breaking the listener in gently. Small Town Titans announce their arrival on the scene with an almighty (and rather lengthy) scream from frontman/bassist Phil Freeman on the opening track of their latest album; ‘The Ride’.

The York, PA power trio doesn’t do subtle, opting instead for slapping listeners around the face like reigning champs in the Russian face-slapping tournament (honestly, If you are in need of some laughter in your life, do check out some Russian face-slapping, it is insane). The track in question certainly lives up to its name: ‘Rufflin’ Feathers’. A fine slice of modern rock in an Audioslave vein, fuelled by the masterful riffage from Ben Guiles and cranium crushing grooves from Freeman and his engine-room team cohort; drummer Jonny Ross. Consider those feathers well and truly ruffled.

No danger of the pace letting up as the band crash into ‘The Man’ with another lengthy scream from Freeman. The brief baritone vocals that follow on do come as a nice surprise, but no time to get used to them as the trio lock into a Monster Truck-meets-Crobot sized groove. Freeman does possess an almighty voice with a great range, capable of changing it up at the drop of a hat, throw in some delicious three-part backing vocal melodies, and ‘The Man’ has King Kong-sized cajones. Those delicious three-part vocals? Check them out on the opening moments of ‘Behind The Moon’; they positively thrill. What follows on is equal parts commercial rock, modern groove rock, and good old-fashioned country/Southern rock. The end result provides one of the catchiest tracks of the year so far. Perhaps wanting to give listeners a break from the full-on bludgeoning, Small Town Titans slow it down a notch or two (to an extent) on ‘Let Me Breathe’. Bit of a solo Chris Cornell vibe during the quieter parts, but when it picks up pace, the melodic guitar parts are pure Creed-era Mark Tremonti.

Sadly ‘9 To 5’ is not a rocket-fuelled cover of the Dolly Parton karaoke staple, but rather a slow, relaxing almost ballad-like track you could have easily heard back in the lighters-in-the-air days. Less of a Poison vibe though and maybe more of an Alice In Chains ‘MTV Unplugged’, ‘Sap/Jar Of Flies’ feel, especially when the layered backing vocals seep through. Lyrically it isn’t the standard unlucky in love ballad fare, instead, it’s a tale of everyday folk trying to do their best…” Father’s been working all night long/To feed the babies and keep them strong/Mother’s been waitressing again/To pay for wasted time well spent…” before asking the police officer standing in front of them “…why can’t we drink just to get drunk, why can’t we smoke just to get high…”. A powerful moment and one of the highlights of the album.

‘The Ride’ contains great variety throughout its ten tracks, as best highlighted during the latter stages of the album. ‘Sex and Candy’ is a slow-burning, grungy little number, while ‘When It All Comes Down’ has Small Town Titans initially flooring it before settling into a gravelly-voiced grass fuelled trip, the screams from Freeman return as the track takes a sinister turn, and the listener can only again marvel at his stunning range. Great funky little jam midway through the track which grows into an atmospheric fade-out. Then there is the kitchen-sink approach to the eight-minute title track that ends the album. The semi-acoustic Alice In Chains feel from earlier, returns during the early moments of the track; earthy, organic vocals from Freeman, with cool breeze backing vocals bringing an “alright-alright-alright” vibe. After a cool few minutes, the tempo increases and gradually builds into a monster jam around the three-minute mark, before what sounds like a slight slab of improv a few moments later. The power ramps up a few notches towards the end on a track that allows Small Town Titans the chance to stretch out and spread their wings. In a live-setting, it must be something rather special indeed.

As albums go, ‘The Ride’ is something special, the fact that it’s from such a relatively “undiscovered” band is indeed quite staggering.