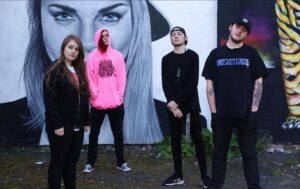 Following the storming success of their previous single ”Grow Up’, The pop punk outfit OCTOPUS MONTAGE have just unveiled their latest single ‘Right Here With Me’. If there was ever such a thing as a ‘Pop-Punk ballad’ then this is Octopus Montage’s hat in the ring.

Written by Dec Naylor (Vocals/Guitar), the song focuses on a long-distance relationship and the emotional effects that this can have on an individual. The song is somewhat fictional but has elements of past experiences and points out the reality of some relationships.

Despite not being based fully on a true story, ‘Right Here With Me’ continues to prove that Octopus Montage are dedicated to writing songs that resonate with people’s real-life situations. Right Here With Me is the second track to be taken from their new album, ‘How To Live And How To Lose’ which is being released in early 2021,

RIGHT HERE WITH ME is out now and available at all good outlets, check it out on Spotify, Apple Music and Amazon.

While the music industry is in flux due to the current state of the world, Octopus Montage have taken the opportunity to be proactive and develop in the areas that are still available to bands today.

With the backdrop of a hugely successful track on Spotify, a cover of the Scooby Doo theme tune that was released in 2017 but saw a massive resurgence in late 2019 / early 2020, netting over 6.5 million streams and still climbing, the last single Grow Up rapidly reached 10k streams and is currently over 30k.

So, for this relatively young band eager to be out driving their bus around the country and playing live to real people, all is not lost. And their message to the music community is simple. Support your favourite bands, buy their music and merch, stream their music on your chosen platforms, it is only with your support that bands will still be around to come and entertain you on the other side!