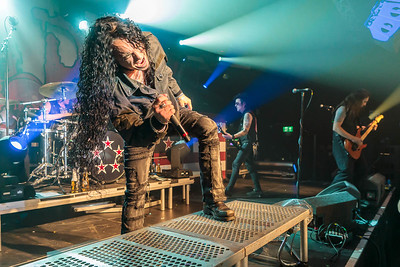 Somehow, in all the time I have been shooting and reviewing gigs, I have managed to miss The Tramshed in Cardiff as a venue. That was put right when I travelled up from the SW to see a cracking four band bill stretching from the young and new, to the far older and well travelled, and found a great venue with decent lighting and sound, as well as a flipping good bar! 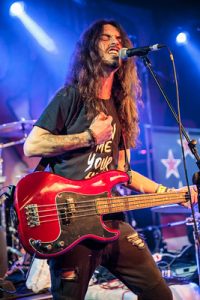 Opening the night at an early hour, but drawing a great crowd were one of my favourite NWoCR bands, Hollowstar. Every time I see these guys they seem to grow in confidence and ability. Having time on tour has led to a tightness musically, and Joe’s voice seems to be maturing and gaining in strength. Tonight is a brief 30 minute set (in comparison to the hour plus epic at Cornwall Rocks) but that just means chance to shoehorn in all of the best bits of their catalogue.

Two songs define Hollowstar for me. First there is the always emotional intro to “Good Man Gone”. Sometimes the reason for a song’s existence almost overrides just how good a song it is. The band’s commitment to mental health is clear but never mawkish or overstated. Then there is “All I Gotta Say” complete with sing along anthem chorus. The quartet leave the stage to a great response and chatting to a few people in the bar certainly won many new friends. 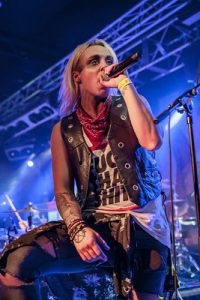 Sandwiched between them and The Quireboys were Swedish Sleaze Metal types Crash Diet. For some reason Sweden seems to the home of this sort of Glam/Sleaze band and Crash Diet are very much of the mould. Led by Gabriel Keys on vocals, flanked by Martin Sweet on guitar and Peter London on bass, with Eric Young on drums they took the energy in the room built up by Hollowstar and grew it nicely. With songs spanning well over a decade such as opener “Tikket” from 2005’s album “Rest in Sleaze”, through to “Rust”, off the album of the same name released this year, they built to a crescendo, ending their brief set with “Generation Wild” to well deserved applause and cheers.

A few weeks ago I saw The Quireboys play at a small festival in Cornwall and was blown away by just how good they were live. Tonight, for some bizarre reason, they were given all of a half hour set, which to be honest as main support seemed bizarre! A three band line up with Hollowstar, The Quireboys and Skid Row would have seemed far more sensible, and from the moment Spike and the guys hit the stage they seemed to agree, and to take it as a challenge to raise the roof. 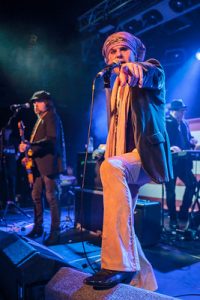 There are no fancy gimmicks on show, just a bunch of great musicians playing simple Rock n Roll, REALLY well led by a charismatic singer whose voice gives me goose pimples. Opening with “Hey You” we are straight into party mode. I am enjoying myself so much I am singling along with every word (so much so a fellow tog when we left the pit simply asked “Enjoy that did you?” And laughed. No idea why? Don’t we all go to gigs to have a bloody good time?) There isn’t long so not much chat. Straight into “There She Goes Again”, such a great song to sing along to, “Original Black Eyed Son”, “Mona Lisa Smiled”, “Sinners Serenade” and “This is Rock and Roll”. Then, to nail the point well and truly in place they finished with “Sweet Mary Anne” and to the call of “What time is it?” “7 O’Clock” bought the set to a close FAR too swiftly. No time for a “Sex Party”. No time for “I Don’t Love you Anymore”. C’mon! 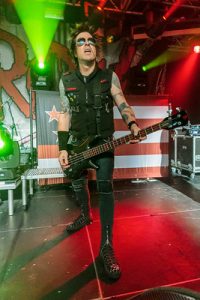 To really rub salt in the wound it seemed to take for ever for Skid Row’s stage to be made ready. Some fifteen minutes passed after the stated start time before they finally appeared (meaning I could have got both of the above songs – no problem!)

Ripping into “Makin’ A Mess” and then running straight into “Big Guns” the saying that class is permanent is very suitable. Relatively new vocalist ZP Theart is a perfect fit image wise, alongside elder statesmen guitarists Sabo and Hill, complimented by rhythm meisters Bolan and Hammersmith, but he isn’t Seb Bach in terms of vocal strength! It is polished and professional, but, to my mind, just a little too “American” in that sense and lacking passion whilst being full of image. You can’t fault the setlist or the musicianship though! “Piece Of Me” and “Livin’ On A Chain Gang” precede the first of the mega hit singalongs “18 and Life”. “Psycho Therapy”, leads on to “I Remember You” and more Welsh choral support. That “polish” grates a little as between songs there are quite large breaks as the band have a drink or just seem to take a break.

Quickly back to the music though for “Ghost”, “Monkey Business” and “Riot Act” to close out the main set. The mega bass of “Slave to the Grind” brings them back for the encores with a setlist of “In a Darkened Room”, “We are the Damned” and set closer “Youth Gone Wild”.

I enjoyed it. Skid Row bring a set of classic American exuberance. All the poses and theatre are there and the songs are certainly a part of every rockers past.
I drove home singing Quireboys songs though:-)