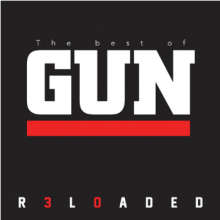 ‘R3LOADED’ serves many purposes. Firstly, it’s cunningly released in the run up to C******s. Secondly, it’s also released to coincide with GUN criss-crossing the country alongside Dan Reed Network and FM (as part of their 30th anniversary tour). But lastly, and more importantly, it serves as a great reminder of just exactly how many quality ‘choons GUN have produced in their 30 year career. And, as most recent album ‘Favourite Pleasures’ proved, they are still making memorable music thirty years after debut album ‘Taking On The World’.

So, with two discs, you get more bang for your bucks. ‘Don’t Say It’s Over’, from the immense ‘Swagger’ album, kicks off disc one and it’s still hard to resist the urge to singalong with the chorus. The same album (recorded as a four piece) is also represented by the dirtier, grittier ‘Something Worthwhile’ which features some tasty riffs from sole guitarist Giuliano Gizzi. ‘Steal Your Fire’ is as gallus as the album with the same name, and even today, it still causes eruptions when the band slip it into the set. ‘Crazy You’ from ‘0141 632 6326’ is still divisive amongst the GUN faithful (as is the album), but here it works really well in amongst the big hitters. The aforementioned debut album, ‘Taking On The World’, brought GUN to the masses, and with the soaring ‘Better Days’ and the inspirational title track, it’s easy to see why.

Disc two is made up of cover versions, obviously including their monster hit ‘Word Up’, as well as live set favourite – ‘(You Gotta) Fight For Your Right (To Party)’. It also features a smattering of covers very brave for a band to tackle. People are precious about their favourite songs, so when a band put their own take on the likes of ‘Rock The Casbah’, ‘Union City Blue’ and ‘Superstition’, then hackles go up. But, if you ever heard Dante Gizzi in El Presidente (during the period when GUN had split) then you will know that he can turn on the pop and funk when called upon. A cover of Rihanna’s ‘Diamonds’ might sound a bizarre choice, but it actually works.

It’s almost C******s after all, the time of year where we are all supposed to be cheerier. Sticking on ‘R3LOADED’, turning the dial up and moving the furniture out of the way, will mean you can have your very own Xmas party. To hell with the neighbours.