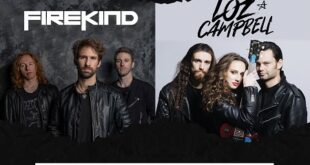 Making good on their promise to come back “real soon”, Californian purveyors of rock & soul Robert Jon & The Wreck are well into their extensive three-month-long tour of the UK & Europe, seven months after their last visit to these shores. Reflecting the buzz surrounding this band, the venues are bigger this time around, and audiences are growing in numbers with each gig. 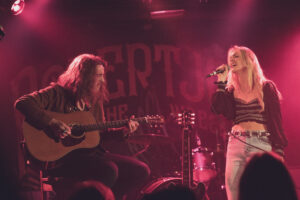 Opening on the 12-shows-in-12-dates UK leg is hotly-tipped Welsh singer-songwriter Laura Evans, who is roadtesting material from her upcoming debut album ‘State of Mind’. With one leg in the Americana camp and the other in the country-rock camp, Laura is all about the songs taking an audience on a journey, and sometimes a journey that many will have first-hand knowledge of, joking “I’ve had my heart broken many many times, which is a bad thing, but makes for good songwriting – this is ‘Fool’…”. Ouch. Performing acoustically with Joe Coombs accompanying her on acoustic and electric guitar, Laura puts enough heart and soul into her set to make sure that when the debut album lands, it will be well worth checking out. As with most acoustic sets, especially in a venue with great acoustics, the set falls foul to the dreaded chatterers at the bar, thankfully the sound guy catches on to this and the sound creeps up without losing any clarity. Moments such as current single ‘Fire With Fire’, an inspired cover of Chris Stapleton’s ‘Arkansas’, and – in particular – album title track ‘State Of Mind’ especially resonate with those paying attention, and being a Celtic cousin, Laura is met with a great reception throughout, and even coaxes some audience participation on set closer ‘I’m Alright’. Once the short set is over with, the chatterers remember their manners and offer up some applause, and Laura is off through the crowd straight to the merch desk. These songs should sound massive with a full band alongside her, look out for future headlining dates, here. 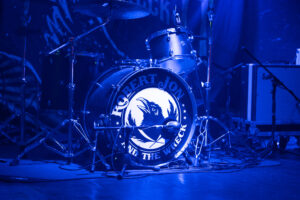 Along with someone setting up a fake social media profile in your name and trying to convince your fans that you do indeed need money for petrol, one surefire sign that you have made it is having your very own doppelganger. And Robert Jon Burrison has a few here tonight. One in particular – complete with trademark cowboy hat (and a single feather), full-on beard, and rocking the double-denim look – is causing some confusion in the darkened venue as a handful of people are giving him a second and third look, some even going as far as approaching him only to get closer and discover it’s not Robert Jon Burrison from California, it is in fact Rab from just round the corner in Maryhill. The real Robert Jon is readying himself to meet the ever-growing crowd and by the time the headliners take to the stage, what was a quiet, echoey venue ten minutes earlier, is now a pretty damn busy juke joint packed with a congregation awaiting the arrival of perhaps the hardest working band on the live music circuit today. 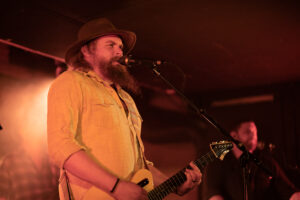 A Robert Jon & The Wreck show is a celebration of life. Well-crafted songs where even if you are hearing them for the first time, they seem like old friends. Songs that instantly spark some form of memory, be it from a lyric, a guitar lick, or a vocal hook. Robert Jon Burrison and his compadres produce music that everyone can identify with whether it be about drinking (the majestical ‘Tired Of Drinking Alone’) or that ex who is still lingering like a bad smell (the sharp-as-a-tack observation on life – the slide guitar-drenched ‘Old Friend’). The latter especially goes down well tonight with the Glasgow congregation and it seems that everyone in the audience recognises someone from the lyrics, hell, even Laura Evans and Joe Coombs are bopping away to it over at the merch desk. And that’s one of the greatest things that an artist can do, especially during these what-the-hell-is-coming-next times, pick up the audience and transport them to a different moment in time when things were simpler, and put a smile on their face at the same time. And all coming from a band with an arsenal of songs so strong that they can afford to air the wonderful ‘Do You Remember’ early on during a fiery 90-minute set. The lighter-than-light singing guitars from lead guitarist Henry James and fellow six-stringer Burrison on this one are probably still ringing around the venue (a former church) even now, 24 hours later. 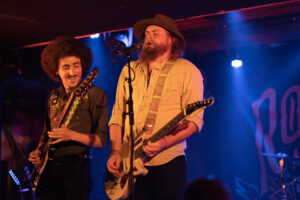 The set never once dipped in authenticity during the evening, and highlights are numerous. Take a deep breath and dive into the soulful side of the band seeping through on the gorgeous ‘Everyday’, the feelgood ‘Oh Miss Carolina’ which needs shouting about from the highest mountain, the instant-classic that is ‘Desert Sun’ (written by Henry James and also features some beautiful playing from the guitar-hero-in-the-making), Robert Jon asking the crowd; “can you move…can you sway your hips?” Before stating that “…it might be a Wednesday night, but actually, it’s a Saturday…” which could only mean one thing: ‘Shine A Light On Me Brother’ was ready to land and for four rip-roaring minutes, the spirit of Joliet Jake was in the room. The standout moment, however, had to be the mammoth version of ‘Cold Night’ which in all honesty, had to be witnessed in the flesh to be believed. Weighing in at thirteen-plus minutes, it was the perfect example of the band stretching out and letting the song take flight in an earthy, organic way. The studio version of 2015’s ‘Glory Bound’ album clocks in at four minutes, but this was something else. Multiple jaw-dropping solos from Henry James during the first five minutes, a short piano solo from Steve Maggiora which becomes a duel with Henry James, Burrison leading the crowd in a clapping frenzy while drummer Andrew Espantman builds the noise to a crescendo, and when that crescendo hits – here comes James with yet another fiery guitar solo of ‘Freebird’-sized proportions. Damn, this band can play. What a way to end the evening. 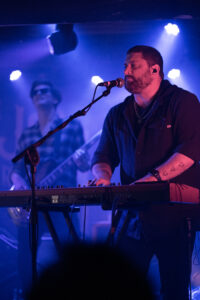 Special mention should go to bassist Warren Murrel who is a joy to watch, not only because of his playing prowess (which is impressive enough) but also because not many musicians can pull off wearing shades in a venue that is darker than the darkest thing you can imagine and then trebled in more darkness, but Murrel does and manages to make it look natural. Ever-smiling at the back of the stage, he is loving it, and the phrase “Dancing to the beat of his own drum” might have been coined just for him.

Robert Jon & The Wreck are not an overnight sensation, they have been making inroads for some time now, but with the band on a hot streak of form with one standout album after another, and some serious road action (seventeen dates in Spain alone – increíble), their time is now. An opening slot on an Academy-sized tour, or better still; an arena tour, would put them in front of thousands of fans…but in this form, who would want to follow them?

Robert Jon & The Wreck end their UK tour in Southampton, at The Brook on Friday 20 May, before heading to Europe. Find all tour dates here. It’s time to #GetWrecked

With festival appearances and a second run supporting Magnum fast approaching, THEIA are excited to …