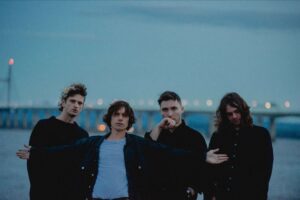 Striking while the plaudits from debut album ‘Forever Whatever’ are still ringing in their ears, Taunton-based “power-rock” outfit October Drift have put the downtime enforced by COVID to good use and released a quick follow-up in the shape of the ‘Naked’ EP. As the title suggests, this is the band stripped of the wall of distortion that opened ‘Forever Whatever’ and brought the band to the attention of outlets as varied as Kerrang, NPR, and Clash.

Made up of four tracks; two reworkings of album tracks ‘Naked’, and ‘Cinnamon Girl’, as well as two new tracks; ‘Like The Snow We Fall’, and ‘Still’. ‘Naked’ is not a few guys with acoustic guitars and a Cajon. It’s a delicate, poignant mix of lavish string orchestrations, subtle playing and even-more subtle vocal harmonies, and some of the most stop-you-in-your-tracks lead vocals this side of Richard Ashcroft. Stick on both ‘Naked’, and ‘Cinnamon Girl’ and let Kiran Roy’s vocals wash over you as they whisper in your ear that it’s all going to be alright-alright-alright. Such a strong, atmospheric voice, full of character, and when the vocals take off on ‘Naked’ (alongside the lush arrangements) it’s hard not to be swept away. Giving the listener more bang for their bucks are the two new tracks. First up is ‘Still’ which features a beautiful guitar-picking sound, vocal harmonies to die for, and a pacing which is in no rush to go anywhere except deep into the listener’s psyche and stay there for some time. Rounding out this short EP is the other new track, lead single; ‘Like The Snow We Fall’. A simple acoustic guitar sound, a piano that sounds like a bell tolling, then utterly gorgeous string arrangements, and gentle vocals that build into something special. A surefire case of saving the best for last.

Other bands, trendier bands, darlings of the mainstream hipster press, will get more column inches, but not many will produce a moment as powerful as ‘Like The Snow We Fall’. Simply beautiful.