Review: Laura Evans – ‘Running Back to You’ EP 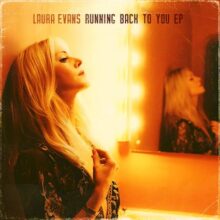 The recent success (2020 get’s a pass) of the traveling Country music festival Country 2 Country has highlighted the rapid growth of the Country/Americana/Roots music scene in the UK. One of the most pleasing aspects of said success has been the amount of young UK based artists getting their chance to shine in what is a highly marketable genre. Hailing from Aberdare, South Wales, singer-songwriter Laura Evans has performed at C2C, as well as supporting another UK success; The Shires. The confidence that she must have gained from both experiences is there for all to see on her new EP; ‘Running Back To You’.

The urge to mention the iconic Stevie Nicks when talking about Laura Evans can be overpowering, especially when the EP’s lush title track displays such strong Fleetwood Mac vibes. Talk to many Country artists today and they will mention Fleetwood Mac as a major influence. Mac’s use of gorgeous harmony vocals still thrills decades after the release of the seminal ‘Rumours’ album. And ‘Running Back To You’ (the track) is chockfull of them, along with other Mac-isms, including the gradual increase of tempo in the drum sound towards the song’s end. But when Evans is at her most vulnerable and fragile, especially on the towering piano-driven ‘Mess Of Me’, she sparks comparisons with a giant of the Country genre: Emmylou Harris. An artist with a voice emotional enough to make Old Nick himself see the error in his ways, Harris makes you stop what you are doing and pay attention. And there are moments during ‘Mess Of Me’ where Evans does the same.

Before all this, the listener is treated to the gritty opening track ‘Drag Me Back In’, which wouldn’t sound out of place on the new Larkin Poe album. Bluesy with a dash of gospel-tinged soul, it’s a real slow-burning gem of a track that gets more atmospheric, and larger than life with each listen. After the aforementioned ‘Mess Of Me’ leaves the listener on the floor, Evans picks them back up with the heartfelt love-letter to her birthplace; ‘Aberdare’. It’s a simple tale of getting back home to familiar surroundings, and one that anyone with strong roots will enjoy. Rounding off the EP is an acoustic version of the title track, a more stripped-back organic version, which works well and gets the feet tapping and the hands clapping.

Expertly produced by Josiah J Manning (Kris Barras Band), ‘Running Back to You’ is an accomplished, mature release from an artist marked as “one to watch”.