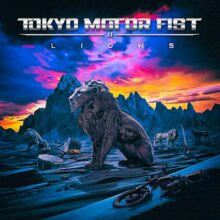 As sure as the sun rises in the morning, and sets in the evening, Tokyo Motor Fist was always going to release a sophomore album. A band doesn’t get the kind of acclaim which met the 2017 self-titled debut and decide not to come back for a second inning. Like most supergroup projects from Frontiers Music, it was always a case of making schedules work. But could lightning strike twice? The answer to that would be a resounding yes. Yes, it can.

With Ted Poley from Danger Danger and Steve Brown from Trixter calling the shots, Tokyo Motor Fist was only going to go in one direction; ‘80’s inspired melodic hard rock. Slick and polished, with enough hooks to land Moby Dick’s bigger brother.

Opening track ‘Youngblood’ comes blasting out of the speakers with thrilling guitar riffs and Rick Savage-sized backing vocal harmonies (courtesy of Brown), lush enough to have the listener’s hair growing back into an ‘80’s style mullet. Hair Metal was big in those days, so deal with it. ‘Youngblood’ is one of those moments that no matter how many times you hear it, you will be reaching to turn the volume dial skywards. As far as album-opening tracks go, this is one of the best.

‘Lions’ is great fun, and that’s the key selling point. Tracks such as ‘Monster In Me’ are instant flashbacks to a time when Bon Jovi, Leppard, Warrant, Poison, et al were on constant rotation on MTV. ‘Around Midnight’ is pure adrenalized fun, played at a great tempo expertly controlled by drummer Chuck Burgi and bassist Greg Smith. Although it has quite a modern feel to it, the end-result is retro, but in all honesty, when a track is as strong and memorable as this, who cares if it is not reinventing the wheel? Likewise, ‘Mean It’ has instant earworms which would have put extra wings on Poley’s and Brown’s mansions back in the day.

The biggest accusation which hair metal bands faced was that they had no substance and couldn’t play for shit, both of which could be applied to Poison. But Poison knew how to entertain and send the crowd home smiling. And who could begrudge a band putting a smile on someone’s face, especially during the current shitshow that is 2020? Tokyo Motor Fist do however have substance, and can play; Steve Brown has more riffs and solo’s on ‘Decadence On 10th Street’, ‘Dream Your Heart Out’, and ‘Winner Takes All’ than he has had over the decades with Trixter, and no doubt he would have purred with delight over the Perry/Whitford Aerosmith strut on ‘Sedona’.

Would it be argumentative to suggest that both albums from Tokyo Motor Fist feature the best work that vocalist Ted Poley has produced in his lengthy career? Perhaps. But unless you are a die-hard Danger Danger fan then you might be hard pushed to come up with a counter-argument. Maybe it’s the partnership with Steve Brown which has brought out the best in Poley, or maybe it’s just the fact that Tokyo Motor Fist displays a harder edge than both Danger Danger and Trixter? Whatever the answer is, Poley and Brown have never sounded better.