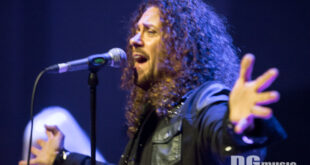 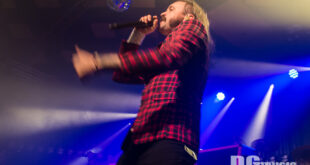 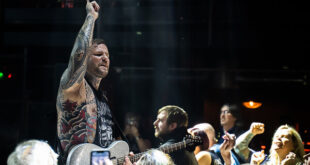 After the stop-start-stop-again merry-go-round of the last 18 months or so, it’s a relief that live music is making a welcome return, and musicians can get back out there and perform again. For some time now Glasgow’s King King have been sitting on latest album ‘Maverick’, and the band (recently bolstered by the addition of Stevie Nimmo on guitar) are finally able to let their adoring fans get intimate with material from undoubtedly the strongest King King album to-date. With the tour split into two legs, tonight saw the band making the short journey East to bring the first leg to a rousing, and emotional, conclusion. The role of special guests on the 2021 leg fell to hotly-tipped husband and wife duo Aaron and Grace Bond, also known as When Rivers Meet. 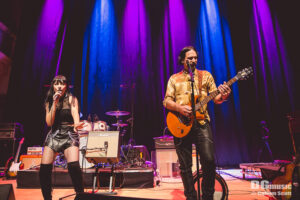 When Rivers Meet plays a heady brand of blues-rock mixed with dashes of roots and Americana, and through expert use of social media during the lockdown, the duo has built up quite a following, several of whom are in the audience tonight. Tonight’s set is the perfect example of how two musicians can make a loud (and varied) noise by thinking outside the box and constantly mixing it up. Aaron has a handful of impressive instruments at his disposal – including a gorgeous cigar box guitar – and provides some booming beats by operating a kick drum with his heel, very effective on the kicking up dust set-opener ‘Did I Break The Law?’. 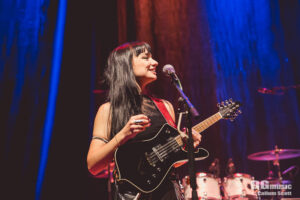 For obvious reasons, there is great chemistry between the pair, and the vocal harmonies are a highlight of the evening – ‘Walking On The Wire’ in particular stands out for that very reason, although the mandolin that Grace wields for the song runs the harmonies a close second, a very cool looking axe, almost like a miniature Paul Stanley Ibanez signature model. Comparisons are routinely made between any new female vocalists like Grace and iconic female vocalists such as Janis Joplin, but Grace is not the next Janis Joplin, she’s the first Grace Bond, and the world is there for her to conquer. Aaron, damn, he is amazing to watch (especially in the gold shirt inspired by the Vegas-era of his part-namesake Elvis Aaron Presley) and it is going to be a thrill watching both when they return on their own headlining tour next year. Tonight though it was all about making an impression, and judging by the number of people waiting to meet the pair at the merch desk after the show, it was a case of job done. A very sweet set, but all-too-short. 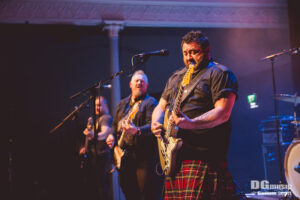 Anyone doubting the impact of the power of music, as well as how much the enforced lockdown affected musicians, would have been forced to reevaluate their opinions after witnessing the smiles from King King as they took to the stage. In particular, the beaming smile from Mr. King King himself, Alan Nimmo, was bright enough to provide enough natural energy to power the country for a month, meaning no need for COP26 to go ahead next week, which saves on the air miles, and gas-guzzling armoured limos stuck in a tailback as the inhabitants search for their vaccine passports…sha, as if…that’s just for ordinary folks at King King gigs. The look on Nimmo’s face as the band launched into opening track ‘(She Don’t) Gimme No Lovin’’ was priceless, and perhaps one of relief that the band had made it to this stage unscathed when so many tours had fallen foul of the dreaded call-offs.

It’s almost been one full year since King King released ‘Maverick’ and once ‘(She Don’t) Gimme No Lovin’’ fades out, the band dips into the album for the first time with the keys-led, toe-tapping, Bad Company-Esque ‘Fire In My Soul’. As you would expect, the lions share of the set is made up of ‘Maverick’ tracks, and even though it is the “new” album, people have had a year to become familiarised with the tracks, therefore there isn’t any of the hesitancy that can often greet new tracks. During another new track, ‘One World’, it becomes apparent how crucial the warm, lush keyboards from Jonny Dyke are to the King King sound, and the feeling he emotes with his Hammond is, at times, jaw-dropping. ‘Rush Hour’ has always been a fan favourite, and in the six years or so since it arrived on the ‘Reaching For The Light’ album, it has grown in stature and becomes a fantastic vehicle for some audience participation. Dyke also plays a major role on this one, by creating the perfect atmosphere for Alan Nimmo to impress, not only with his rich, soulful vocals but with his guitar playing, which throughout the entire evening is nothing short of spectacular. 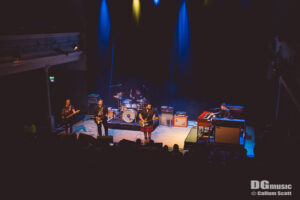 The addition of Alan’s brother Stevie on guitar has made the King King sound more expansive and having him laying down some subtle rhythm guitar while Alan is soloing helps give the songs a cinematic quality; evident on older tracks such as ‘A Long History Of Love’, which is simply stunning. ‘You Stopped The Rain’ is usually dedicated to Stevie, but tonight it’s dedicated to a King King fan, Joyce, who has just been given the all-clear after cancer. Another emotional moment is when Alan dedicates ‘Whatever It Takes To Survive’ to anyone who has had to see somebody suffer but couldn’t help them, after the last few years that everyone has had to endure, this seemed to really hit home, and there were more than a few moist eyes during this one. Standout moment of the night would be the spine-tingling version of ‘When My Winter Comes’, and it’s plain to see why King King feels so strongly about it, strong enough to make it the only new song in a three-song encore. Performed by both Nimmo’s and Dyke, it’s a lesson in how to build a song, and no doubt will be hard to dislodge from its place in the encore. Drummer (and local boy) Andrew Scott, and bassist Zander Greenshields finish their tea break just in time to rejoin the others for ‘A Stranger To Love’ – which Alan dedicates to everyone in attendance, pointing out how some people are still understandably hesitant to come to a live show – and set-closer ‘Let Love In’.

Considering how long King King have been off the road, they made this look easy.

The second leg of the tour will continue from February 10 – 24, 2022 with special guests The Damn Truth. Dates below: