Review: Inglorious – We Will Ride 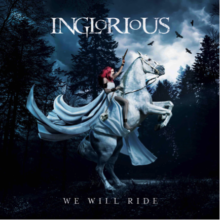 I have seen Inglorious play live now maybe half a dozen times. Twice with the “old” lineup and four times with the current. Each time I have seen this iteration I have been blown away by the obvious camaraderie on stage, not to mention the sheer class of musicianship. The big question was, “Could they bring something new to the recording process when they got into the studio?”

Oh Boy! Have they ever?

“We Will Ride” is a simply stunning album from Nathan and the guys. I would go so far as to say it is one of the best rock albums released in a VERY long time.

Huge credit must go to producer Romesh Dodangoda who has brought a clarity of sound to the tracks that allows the band to truly show just how class an act they are. That isn’t just my view. It is backed up with science. This is the ONLY album that my iPhone wants me to turn the volume down on every time I play it. I listen to music on every journey to and from work and no other album has ever done that!

The tracklisting begins with “She Won’t Let You Go”. A rich little riff that suddenly explodes when Vinnie Colla’s bass, and Phil Beaver’s tight sounding kit. vibrate anything resting on the surface holding the speakers towards their doom. It’s a short but catchy little track that hints at what is to come with the man himself Mr. James in fine voice and features a face-melting solo.

So far so good, but then along comes “Messiah”. The vocals go low and a little menacing and then simply explode into the chorus. Holy Crap this is a BIG SONG! The rawness in the big man’s voice when he rips into the final chorus and then showcases that extraordinary range is unmatched. A massive tip of the hat to early Whitesnake follows with “Medusa”. Danny DeLa Cruz brings the song in with a disgustingly dirty slide riff and the track (co-written with Joel Hoekstra) adds another vibe to the wide ranges of styles and sounds this group of musicians throw at us.

“Eye of the Storm” takes the tempo down with the most beautiful clear lyric from James. His voice just drips with syrup and washes over you before bursting into a more uptempo chorus. The production somehow manages to perfectly match the upfront vocals with layers and layers of guitars from Dan Stevens and Danny, and yet the rhythm is also high in the mix. Just when you think you know where the song is going there is a bridge with an utterly massive guitar hook that teases that it is going into a huge solo but pulls back into another vocal. Clever, clever stuff! 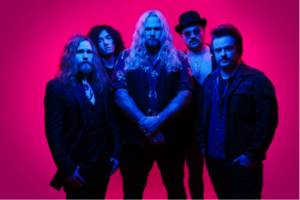 “Cruel Intentions” – I mean, as if there aren’t enough different styles already, Inglorious open this one with a quiet, acoustic, Spanish sounding piece of deliciousness before throwing all the bombast and power you could want as this time the vocals are shouted right in your face and the solo is somehow both understated and an utter showoff! Almost halfway through the album and every single song shows variety.

I actually laughed out loud when “My Misery” came on. Not from amusement. From sheer joy as the keyboard opening (more please guys, it adds yet another dimension) rips into an utterly massive riff, then becomes introspective. This song, possibly more than any other, showcases the range Nathan James is capable of in a way that isn’t purely for effect, but more to write songs most vocalists wouldn’t do justice to. The low notes are warm and have the most gorgeous timbre and the higher notes just ladle on the power. Another big riff opens “Do You Like It?” A sassy and classy belter that again gives a chance for those lungs to do their stuff.

I am going to rush ahead to the song that left me slack-jawed in wonder. “He Will Provide”. Opening with something Ritchie Blackmore would have been proud of, this is an absolute anthem. The guitar riff is unlike anything I have heard from them before with dark, Eastern scales and delicious atonality. Inglorious have covered “Uninvited” in their live show and you can hear a similar disconcerting chord structure. It would be a superb live set opener with the scene-setting guitars bringing in the vocals. Then, suddenly, the song goes atmospheric with a big bassline and Danny Dela Cruz ignites a fire. Simply the best guitar solo I have heard in many, many years and it grows and grows. Standing ovation that man. THIS is what I wanted from this line-up and then some!

“We Will Meet Again” showcases a funky bass from Mr. Colla and then a glorious, soaring riff fills the speakers leading into another verse of plaintive vocals and a ridiculously catchy chorus. More Rainbow influences as a guitar line throws “God of War” at us and more silky-soft vocals. It is this quality that really shines about James’ voice this time around. The light and shade plus range of power to supplement that phenomenal multi-octave vocal. A final scream ignites the last few bars sending the song out with a real bang. The album closes with the title track “We Will Ride”. Bombastic and a microcosm of all that is good about the entire album. Big drums, huge basslines, swelling, layered vocals, and riff upon riff from DeLa Cruz and Stevens.

I had hoped for much from Inglorious having seen how well this line-up plays live together. Expectations well and truly exceeded. “We Will Ride” is a modern classic. Whatever your views may be of the past, give it a listen. If you love rock music you owe it to yourself to do nothing less.