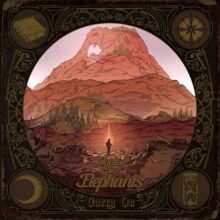 London-based quartet Hunted By Elephants returns with album number two: the rather timely named ‘Carry On’. “Classic Rock” might be the peg to hang their duffle coat upon, but dig a bit deeper and there’s more on offer than simply meat and two veg.

Guitar-driven Rock is very much the order of the day with Hunted By Elephants, and in Roman Flourendzou they have a fine six-stringer with a wide range of licks, riffs, and tones, but there are moments on ‘Carry On’ where the band offer up something slightly different from the norm. Opening track ‘Let Me Be’, for instance, begins with some feedback from Flourendzou, drummer Alex Butticè joins him with simple cymbal strikes, and the impression is that the band are going to floor it for the “traditional” full-pelt album opener. Nope. Instead, Hunted By Elephants zig instead of zagging and break into a slow jam that screams of the legendary British bands of the late ’60s and early ’70s where it all began with the Blues. The band are still playing it cool when vocalist Apostolos Liapi comes in, and the band goes to great lengths to let the song breathe rather than go for the money-shot from the off. Hints of Free here and there, especially with Flourendzou’s playing, and the subtle bass lines from Raymond Phelan. ‘Ghost Song’ is another moment where the band offers up something different. A laid-back vocal performance from Liapi that sparks an early Ian Gillan vibe (Gillan without the fireworks), to an extent a King Crimson-esque proggier sound from the band, and backing vocal harmonies that hark back to the early days of the Moody Blues when they were considered “edgy”. Just a few tracks that highlight a band thinking outside the comfort zone.

There are plenty of moments on ‘Carry On’ to keep the most ardent fan of melodic guitar work happy. The title track is just one occasion where a Thin Lizzy influence is clear for all to hear. Lovely tones from Flourendzou, belting solo towards the end and combined with a thick bass sound from Phelan, some cowbell, and a few subtle Hammond organ flourishes, make for an interesting four minutes. ‘The Weapon’ has Hunted By Elephants paying homage to The Who with some killer power chords, an Ox-like bass performance from Raymond Phelan, and Apostolos Liapi having a blast as he highlights everything that he has in his repertoire: although the song does belong to Alex Butticè and his powerful work behind the kit. ‘Keep On Giving Me Loving’ is another highlight; lovely guitar work, and more of that subtle Hammond sound, all wrapped up with a pulsating bass groove. Liapi shines on the softer, chilled strains of ‘Towards The Light’, more vocal comparisons with Ian Gillan, especially the high notes, on a track that thrills from the very beginning.

‘Carry On’ requires multiple visits before every little nuance is appreciated. There are some fantastic moments throughout the album: ‘Towards The Light’ and the mellow Zeppelin vibe of ‘Take Me Away’ being just two. It’s not an instant, throwaway album, it takes time to build. Time: what we seem to have in abundance these days.