The Old Revival is an Oregon-based 5 piece band. The second album from the band “9 Meals from Anarchy” was released towards the end of 2020 and we caught up with founding member Brandon Prinzing to fill in the blanks on our introduction to The Old Revival. 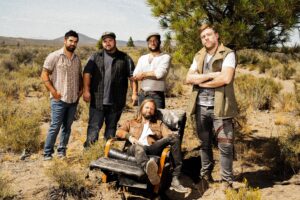 It’s been a long, winding road to get where we are today. I was writing and performing music in my early 20’s when a tragedy completely took over my life and ended any involvement I had in the music scene for almost 6 years. In that time I wrote a collection of songs as a form of self-therapy that later became our first record “Hear This” that we released in 2018.

After the first record and the tours that followed, we began working on new music. In that time, Ian Cook and Andrew Carew of Larry and his Flask made their way into the band. Ian, our bass player Jesse and drummer Gus had all grown up together playing music, so when they joined it was like we had always been playing together. We went straight to the studio and started recording “9 Meals from Anarchy”. It’s brought out all of our influences and made The Old Revival into a new monster, and it’s a monster that I like.

Our first gig was at a smaller venue in our hometown of Bend, Oregon. Small room with lots of energy, and that’s hard to beat.

They should expect a rock band, and for us that term encompasses a lot. We love that big soaring rock sound with harmonized guitars but also the subtlety of a song where less is more. At our core, we are just rock n’ roll.

I would say you just have to be genuine. If you are writing music that means something to you and you have something to say, it shows. I think that carries a lot of weight. For me, I’ve always tried to be really honest in my lyricism, to the point where I feel like it’s even too personal. But, those always seem to be the songs our fans connect with the most. 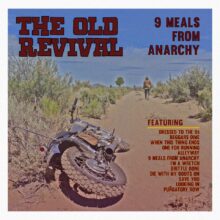 Our second record “9 Meals from Anarchy” just came out everywhere on November 20th. We recorded it over about 9 months in Bend, Oregon at The Firing room with Dayne Wood. It’s a loosely based concept record written around Alfred Henry Lewis’ theory that any society is only 9 missed meals away from descending into chaos and anarchy.

With this album, we were really able to take the time to capture every sound we wanted people to hear. From the horns, piano, harmonies and guitar work, the songs all got the treatment they deserved. It’s something we are really proud of.

I’ve always thought we would fit well with White Reaper.

Man, I wish I knew. There are countless bands out there with so much talent.

When I was a kid, I remember somehow getting the AC/DC Live at Donington DVD. When I watched that, I was mesmerized. Watching a performance like that, the energy, the way everyone was brought together, that made me feel something different than I had ever felt. I knew I wanted to play music right then.

Well, the last show I bought tickets to was to see PUP. Then all shows started getting cancelled and lockdown began. Just hoping I can see shows again in the near future.

Anyone that knows me knows that I listen to just about everything when it comes to music. But people always seem surprised that I love old country artists. The storytelling and lyricism of Willie Nelson in particular.

Jump Rope Gazers by The Beths. Without a doubt I have listened to that record more than any other released in 2020. Amazing harmonies and so well written.

We try to stay connected with everyone as much as possible via social media, now more than ever. You can find us @theoldrevival on instagram and here on Facebook.