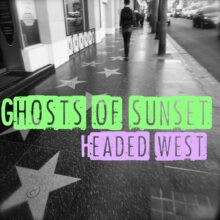 With 30+ years experience in making music, Ghosts of Sunset are a new-but-not-really-new band. The two main players, John Merchant and Todd Long have many miles on the clock between them, and after releasing a few singles as appetizers, they have delivered the entree in the shape of six-track debut EP: ‘Headed West’.

The clue is in the title; for ‘Headed West’ is a concept EP based on the 1980s rock/hair/metal scene. It features a fictional US midwestern band taking a chance and heading west to L.A. to ply their trade in a flourishing music scene, and all the pitfalls that await them. Merchant and Long raided their contacts list and roped in survivors of the scene to add some authenticity; hence players from acts such as L.A. Guns, RATT, Enuff Z’nuff, KIX, and Lita Ford, all stop by.

The feeling of excitement, and butterflies in the stomach, which kicks in just as a journey is starting, is represented by the opening (and title) track. It’s glam, uptempo, and deals with the sense of optimism from this new fictional band going to LA.to seek their fortune. It’s a musical equivalent of ‘We’re Going on a Bear Hunt’, but instead of a bear waiting on the protagonists, it’s fame and fortune, and hookers and blow. Although the theme of the album might be “hair metal”, the music on offer from the title track and its immediate follow-up ‘Another Rock N Roll Show’ is more glam rock, and if you can imagine a mash-up of The Sweet, Cheap Trick and Enuff Z’nuff, then you are almost there. Fantastic guitar work throughout both tracks, but ultimately it’s the song-craft that sticks out the most. Perfect bubblegum power-pop with lashings of riffage.

Power-ballad (of sorts) ‘Miles In-Between’ has the band beginning to grow some wings and hitting the road on tour. Dealing with keeping a long-distance relationship going while one half of the relationship is on a tour bus and the other half is at home, it’s a few minutes that most grizzled musicians will identify with. Merchant has a wonderful, light voice that suits the vibe of ‘Miles In-Between’ to a T, shades of Robin Zander here and there, and along with a killer guitar solo, makes for one of the many standout moments on the EP. ‘Never Goodbye’ continues to keep it low-key, and is perhaps the best song that the Goo Goo Dolls never wrote. Very of-the-time and you would like to think that had Merchant and Long produced this in the ’80s then they would still be coining in the royalties today. The wheels on the tour-bus are starting to come off by the time that ‘It’s Not Over’ arrives, and lines like “..ain’t seen the sun in days, just these four walls, no-one calls…” deal with the time-old problem of life on the road. ‘Try It For Love’ ends the EP and has the band going full-circle by shunning doing it for money and fame, instead doing it for love of the music. It’s a hopeful, uptempo few cinematic minutes that takes a page or two out of the Bon Jovi-via-Bruce Springsteen route and proves that keeping it simple and trusting in the song will always win in the end.

A damn-fine debut and although the subject matter deals with nostalgia, the music on offer doesn’t sound dated at all.