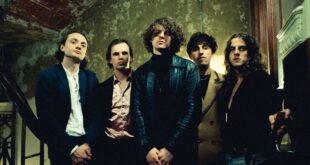 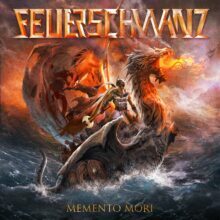 There was something very apt about German folk metallers Feuerschwanz choosing to officially release their latest album ‘Memento Mori’ on December 31st, 2021. If ever there was a band tailor-made to bring the second-shittest year in recent history to a conclusion and put a well-needed smile on so many faces, then it could only be Feuerschwanz. But here’s the thing: since signing with Napalm Records, Hauptmann Feuerschwanz, Prinz ‘Hodi’ Hodenherz, and assembled crew have toned down the comedic leanings of the early days of the band and developed into a serious force of nature, not just in the burgeoning folk metal scene, but also the power metal scene, and ‘Memento Mori’ sees Feuerschwanz following up 2020’s magnum opus ‘Das Elefte Gebot’ in stunning style.

The Latin phrase ‘Memento Mori’ roughly translates as “remember you must die” and Wikipedia has it as “an artistic or symbolic trope acting as a reminder of the inevitability of death”…in simpler terms, life is fleeting, so make the most of it…and by allowing Feuerschwanz to take you on an adventure, you are off to a great start. The German sextet (bolstered to eight members with the addition of dancers/performers/berzerkers Myu Mieze and Musch Musch) is laying down a marker with ‘Memento Mori’ and many casual listeners that came onboard once the Napalm Records marketing team ramped things up with ‘Das Elefte Gebot’ might not recognise the same band if they did a deep dive into the early days of Feuerschwanz. 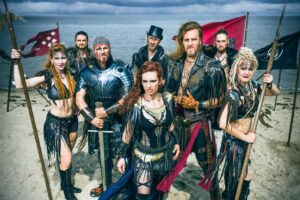 The marriage of traditional folk instruments with intense riffage is as effective as ever; guitarist Hans Platz combines well with Johanna von der Vögelweide (violin/hurdy gurdy), but the guitar sound from Platz sounds way more intense on ‘Mememto Mori’ than previous albums – the majestic (and harsh) ‘Rausch der Barbarei’ is particularly fiery – and it’s clear that the band have made a concentrated effort to ramp up the metal. Opening proceedings with the thrilling title track is a real statement of intent, and it’s pretty much impossible not to be swept up in the pulsating basslines, thick crunching riffs, and the general call-to-arms vibe throughout. The traditional instrumentation from both Johanna von der Vögelweide and multi-instrumentalist Hodi is staggering as it is throughout this lengthy album; the traditional pipes on ‘Untot im Drachenboot’ are insane and coupled with a killer drum sound and some impressive co-vocals from Hodi and Hauptmann Feuerschwanz – the end result is rather special indeed. As is the pairing of the epic ballad ‘Das Herz Eines Drachen’ with the blood-stirring ‘Rohirrim’, and once the chorus kicks in on the latter, it is hard to resist the urge to raise a horn of ale to the sky and saddle up for a ride with Éomer and the famed Riders of Rohan. And that’s what Feuerschwanz excel at – the ability to provide some much-needed escapism through some incredible playing, ultra-strong melodies and vocal hooks that hang around for days on end, and fantastic storytelling. Does it matter that it is all in German? No. Not at all. Language is not an issue, strap on ‘Hannibal’ and crank it up, before long you will be singing that chorus regardless of whether or not you are a German speaker, metal does not recognise such trivial barriers.

With this being Feuerschwanz, the deluxe edition of ‘Memento Mori’ comes with a seven-track bonus disc of covers. With zero pressure on their collective shoulders, the band has set out to make even the hardest nosed of cynics forget what ails them for thirty minutes and make them smile. Sit back and allow yourself to be entertained by romps through the likes of ‘Blinding Lights’ from The Weeknd, Amon Amarth’s ‘Twilights of The Thunder God’, the cheesy Euro-pop from O-Zone ‘Dragostea Din Tei’ (you might be unfamiliar with the name but might just recognise it once it kicks in), and an incredible, star-studded blast of Manowar’s ‘Warriors Of The World’ that has to be heard to be believed.

Depending on what way you look at it; ‘Memento Mori’ is either the last great album of 2021 or the first great album of 2022. The highest compliment this reviewer can pay is that even though a review stream was furnished by those fine folks at Napalm Records, money was exchanged through the old interweb to ensure that a physical copy landed on the doorstep once normal services resumed after the local postie sobered up. If we were a points-based outlet then ‘Memento Mori’ would score highly on the packaging alone, for this is truly a work of art in every aspect. Glückwunsch, Feuerschwanz, glückwunsch.