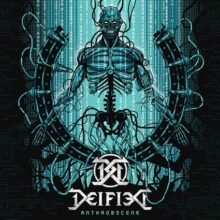 Coming hot on the heels of new music from Devildriver and Lamb Of God, winners of Bloodstock M2TM (Merseyside – 2015) Deified return with thirty minutes of new music in the shape of mini-album ‘Anthrobscene’. Influences are worn proudly on their collective sleeves over the thirty minutes running time, and those waiting on the return of Dez Farfara and Randy Blythe respectively, would be wise to dip into ‘Anthrobscene’ during the wait.

What’s abundantly clear from the off, is the growth in the band since 2015’s debut album ‘Ascension’ and 2018’s ‘Inhuman Manifesto’ EP. One particular area of growth would be the musicianship, and ‘Anthrobscene’ begins and ends with instrumentals that highlight the development within the band. Opener ‘Prelude’ is only one minute long, but that minute belongs to the tribal drumming from Jordan-Stanley Jones. ‘An Ode to Armageddon’ brings the mini-album to a close and showcases the guitar partnership of Matt Pike and Alistair Blackhall, as well as the backbone of the band; Jones and his partner in crime – bassist Tom Simm. One of those rarities: an instrumental that you wouldn’t mind hearing live.

In between both instrumentals are a handful of full-force, bludgeoning metal. ‘Dark Desires’ is a memorable slice of metal made up of powerful drumming, killer riffs, and a fine mix of guttural growls and authoritative spoken-vocals from Jamie Hughes. Guttural vocals can sometimes render lyrics pointless, but Hughes never over-stretches and makes his point very clearly, especially the “In time you will see, you’re better with me, together we’ll all bear witness..” segment that gradually builds in intensity before the guttural vocals are unleashed. Superb.

‘Broken Matrix’ and ‘Enemies Within’ are fuelled by the rampaging double bass work from Jordan-Stanley Jones, and on the latter, spoken-word vocals from Hughes calling to account “men of power…corrupted by greed” ; a bit like Crane’s kangaroo court in The Dark Knight Rises….”death…by exile” – but with skull-crushing drum work in the background. After a short ‘Intermission’, it’s back with the pummelling ‘Apotheosis – Rebirth’ which changes direction and pacing multiple times, then ‘Blood Under The Bridge’ which has a killer Maiden-esque guitar intro before launching into a weighty riff-laden groove and lyrics that most can identify with..“I wouldn’t piss on you if you were on fire”.

Despite dealing lyrically with some of the darkest issues of modern society; mental health, politics, climate change, amongst others, ‘Anthrobscene’ works well in blocking out the white noise of the outside world in favour of some outstanding groove metal from the shire of St Helens.